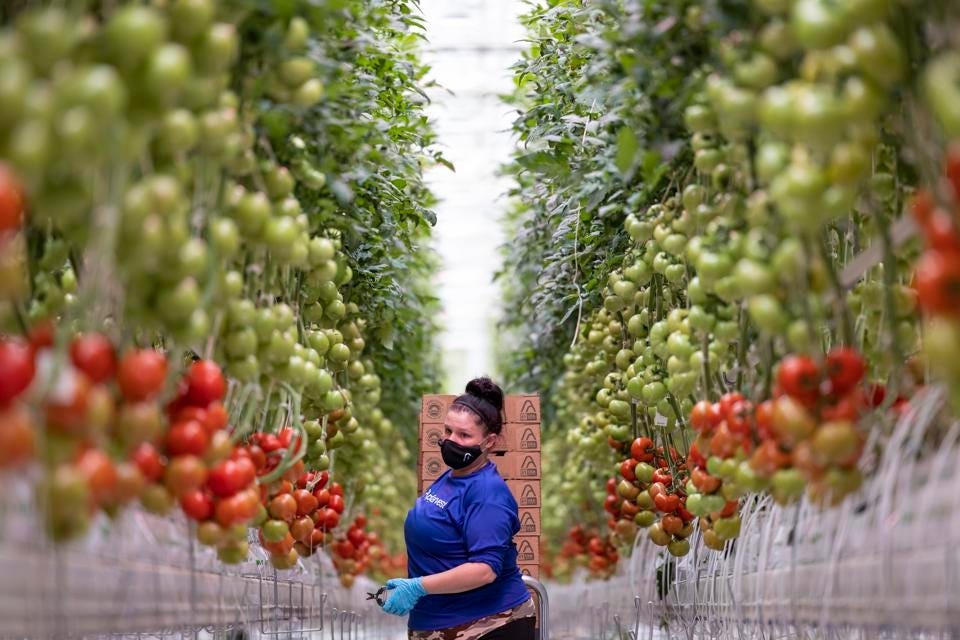 Purpose At Work: How AppHarvest’s On A Mission To Help ‘Feed The Future’ From The Heart Of Appalachia

High-tech science fostering natural processes, plus a bushel of inspiration, are all behind Eastern Kentucky’s AppHarvest’s success. The AgTech company is growing fresh, nutritious produce on a string of vast sustainable indoor farms in a region that’s traditionally relied on coal for its economy.

The company’s Appalachian home is within a day’s drive of 70 percent of the US population, meaning its produce is picked ripe, at peak nutrition, and delivered directly to stores such as Walmart, Kroger, and Costco, typically within a day. This reduces transportation fuel by up to 80 percent.

Less means 90 percent less water (through recycled rainwater). It means year-round (climate-resilient) yield through greenhouses. It means no toxic chemicals in the local ecosystem, with insects such as bees keeping the plants healthy and thriving. No agricultural runoff. Much less food waste.

Aspiring to branch out and feed the world, AppHarvest’s roots remain firmly planted in Appalachia, the heart of the coal economy (Webb’s own great-grandfather died in the mines). The company intends to build an AgTech capital in the region, starting with the $1 billion it’s already invested.

Webb grew up in Kentucky, and founded AppHarvest in 2017 after years in the solar development industry, based in New York. Sustainable investor Equilibrium Capital financed $82 million for the company to build its first greenhouse in 2019. The company also closed a separate Series A funding round led by the socially and environmentally conscious ValueAct Spring Fund.

Of “running a company in rural America,” Webb says, “We’ve got billionaires trying to fly to other planets with their friends but we don’t even have Americans” with adequate access to fresh food, jobs, and opportunities. So, the idea is “a homegrown food supply that’s accessible to all, all year long,” the company says. All for the betterment of humanity and the Earth.

Meantime, the company has created hundreds of local jobs in a severely depressed market — more than 500 jobs during the COVID pandemic alone. Its 5th Congressional District home base ranks second worst across the nation for median income, Webb laments, and has been ranked dead last in one survey of wellbeing.

“As coal mines closed and no businesses replaced them, Webb writes in the company’s 2020 ESG report, “our leaders watched as nearly 30 percent of our friends and neighbors, including 37 percent of children, endured poverty. Appalachia desperately needs investment from responsible companies, creating jobs that prioritize the worker.”

Indeed, the capital markets are waking up to opportunities in such areas, where investments can raise all boats. Bolstering AppHarvest’s Series A round was the first investment offered by Revolution’s “Rise of the Rest” seed fund, helmed by AOL Co-founder Steve Case and Hillbilly Elegy author J.D. Vance.

The idea behind “Rise of the Rest,” says Webb, “was to invest in ideas that aren’t only in New York, Boston, and LA. And I lived in New York. I love New York, but the concentration of capital that goes to companies in San Francisco and New York and Boston — It’s a problem. It’s part of the reason we have the political divide in the country we have right now. We’ve got to figure out how to create an inclusive economy that’s here for everyone. So, here. Doing it here is as important as why we’re doing it.”

“We’re in the first inning of controlled environment agriculture,” says Webb. “We’re not going to have a choice. We have to grow a lot more food with a lot fewer resources, in the middle of climate destruction.

“We don’t have a choice but to use technology, use infrastructure, building facilities with

proven technology, creating new technology on top of that, AI and robotics, but in many cases, steel, glass, lighting, all proven to grow fruit and vegetables” much more sustainably than traditional agriculture, says Webb. “To reduce the human footprint … we have to use technology and we have to use infrastructure. And agriculture has to be a huge, huge part of the solution.”

In fact, Webb believes that in his lifetime, all the fruits and vegetables we eat will have been grown in controlled environments such as AppHarvest’s massive greenhouses.

“I hope in 2050 it’s not a dystopian, post-apocalyptic world where you’re highly privileged to eat a fruit or vegetable out of nutrient-dense soil,” Webb says. “But if we don’t right the ship quickly, we’re not going to have a choice. We’re going to have to grow in controlled environments.”

Sounds like a plan. But is AppHarvest’s produce better than the produce we’re used to? How are their gardens or organic farms? The company is committed to premium taste — Martha Stewart’s on its board — which they say is automatically better if your tomato was grown a day away instead of weeks away and trucked in from Mexico. Automatically better without the two-score or so of chemicals in the average supermarket produce.

“But I always say, if you can get an organic fruit or vegetable from your grandmother or grandfather’s back yard, great. That’s the best place to go. And you should do that,” Webb says. “But for the middle of the winter, or late fall or spring, year-round, controlled environment agriculture produce, no chemicals, nutrient-dense” is in fact, best. “We can give the plant exactly what it needs in order to fruit and ripen exactly the way we want it … We’re not manipulating the plant, we’re manipulating the environment around the plant: humidity, lighting, heat control.”

And of course, indoor farming also benefits the soil. “I call myself a soil loyalist,” says Webb. “I’m as committed to the soil as anyone. The reality is, we can’t feed 10 billion people and continue to extract nutrients out of the soil … We’re extracting nutrients out of the soil, and it’s degrading, not replenishing. We’re extracting water out of our freshwater aquifers and again, we’re not replenishing.”

AppHarvest was founded as a registered public benefit corporation. It soon became certified as a B Corp and is now one of the first publicly-traded PBCs.

Drawn heavily from underrepresented communities and partially from second-chance or fair-chance employment programs, AppHarvest employees are offered free educational classes on nights and weekends in collaboration with regional universities. The company also works with local high schools to teach youth about agriculture, using a high-tech container farm to educate the students on growing and marketing leafy greens.

Meantime, it aims to educate the masses, one farmer at a time, one consumer at a time, one retailer at a time. “It’s infuriating to see that the technologies are available” to grow our food supply more sustainably, even regeneratively, Webb says. “It’s a lack of leadership, a lack of private sector initiative, a lack of government leadership, to be able to put these solutions in place. But controlled environment agriculture coupled with renewable energy — the potential to solve both energy and food security issues globally — forget AppHarvest, it’s more of an industry as a whole, and how do we move that forward in the next 10 years as quickly as we possibly can?”

The secret, according to Webb, is not necessarily to keep tweaking the robots and otherwise iterating the tech. “Nature is the absolute technology, the real technology,” says Webb. “We’re clueless. We don’t even know what nature is yet. The microbes in the soil, the way in which plants communicate with each other — we’re clueless. We’re still trying to figure it out.”

“Our approach at AppHarvest is to put nature first, try to support from behind with technology, and unlock the true potential of what nature has to offer. So, for us, we’re starting with a seed and we’re working to grow a plant out of that seed and simply giving the plant what it wants.”