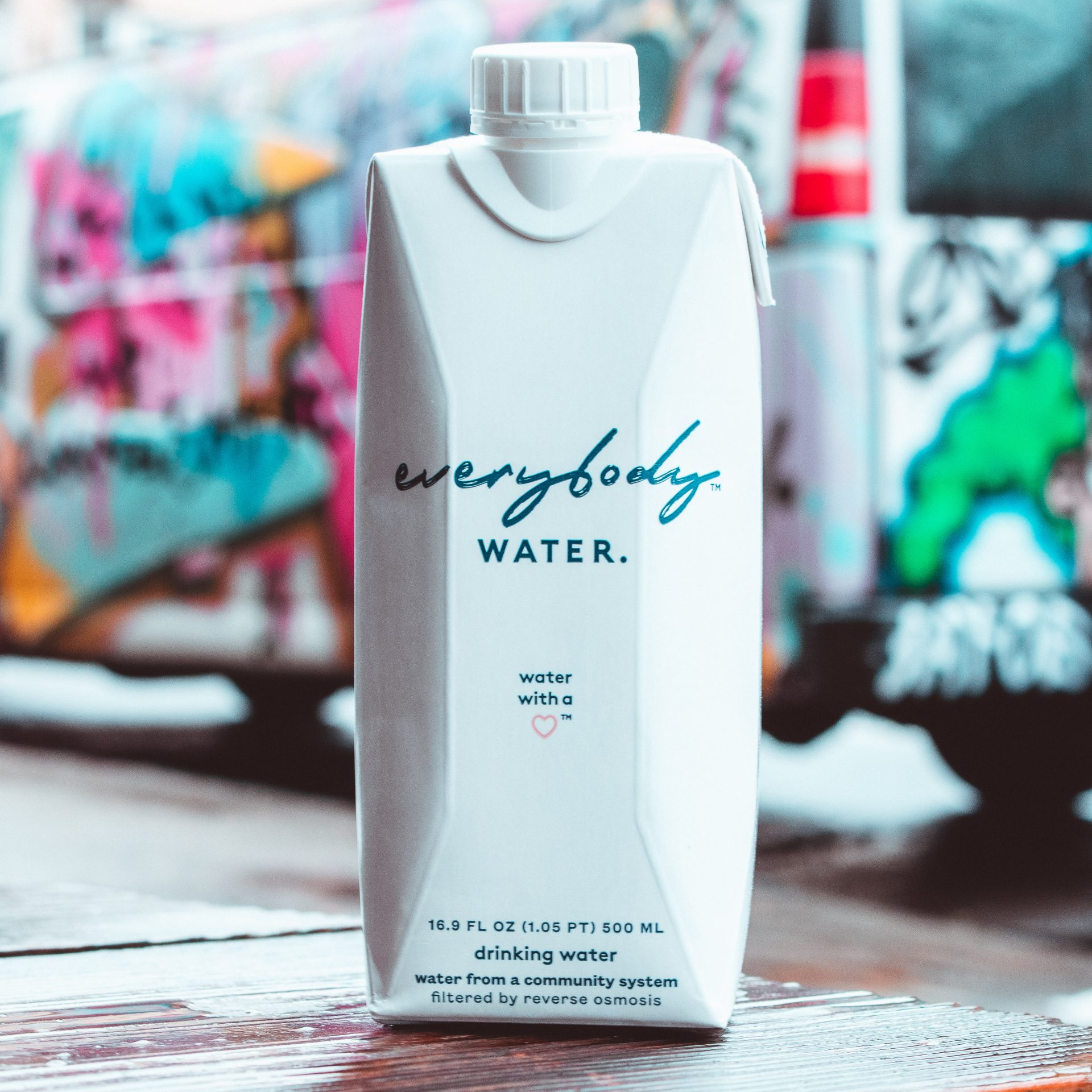 Purpose At Work: How Everybody Water Accelerates Growth and Impact

Competition is fierce in the crowded Consumer Packaged Goods (CPG) marketplace. Unless you have a completely novel invention, it’s difficult to carve out a competitive advantage, avoid a price war, and win customer loyalty.

Everybody Water is an exception. This fast growth startup is leveraging its purposeful giveback to scale revenue and impact. I had the opportunity to speak with founders, Kimberly Reilly and Megan Hayes, about their development. Here’s what we spoke about:

Simon Mainwaring: What inspired you to start Everybody Water?

Megan Hayes: Kim and I started the company three and a half years ago. We happened to live across the street from each other and we both had separate careers. I headed recruiting for major companies and Kim had her own high-end lighting design company. We wanted to do something that gave back. First, it was just a discussion about what that could look like. We weren’t thinking, “Let’s go into business together.” It was about what’s important in our lives. That’s when we started talking about the lives of women and girls around the world.

Kimberly Reilly: Some women are spending five to seven hours a day waiting in line and carrying water instead of going to school or being able to earn incomes with jobs.

MH: It’s not about a lack of water, it’s about lack of access. Once women and girls have access to water in their home, not at a pump in the village, then they’re able to go to school. They’re able to earn an income. There’s a chance for a quality life and a real future.

We wanted a consumer product. We wanted it to be something that you do every day without thinking about it that much. And we wanted something that was beautiful, from the packaging to what it did.

KR: We spent a good deal of time meeting with the major NGOs working in the water space. At one point we thought that maybe we would support multiple organizations and have more exposure that way. As we got into the details, we found that they work very differently. Water1st, the organization we support, stood out because their projects are so sustainable. They’ve completed over 3,000 of them and not one has failed. They’re monitored over time. They work to pump water into the home, the toilet and shower of each person in a community. That is the difference that matters for women and girls because if it’s just a pump in a village, they still sacrifice their time. Time is the biggest resource with the water crisis. That and health.

So in January last year we had our first tractor trailer loads of water delivered. They said, “You need to have accounts before you consider this.” Megan and I literally started selling and delivering ourselves for the first couple of months until we had a critical mass. We started by focusing on the New England area. We began to get attention and did some wonderful events. A big turn for us has been picking up corporate accounts such as hotels in Boston, some of Boston landmarks like the Opera House.

MH: Initially it was picking certain towns. We’d go to the juice bar, the healthy quick serve place, the barre studio, etc… It was in the right town with the right audience, and the right location throughout Massachusetts, as well as Nantucket, Newport and Vermont. In the last few months, we’ve gone from these small accounts to selling cases to selling pallets to selling truckloads.

SM: What’s different about Everybody Water’s impact strategy versus other companies?

MH: We started Everybody Water wanting to fix a problem, not to get into the beverage space. I think when you come to it from that angle, there’s a pureness to it. One of the best advantages is not being in the beverage space. You’re not going to find this at Whole Foods. We’re not one of many. We are often the only water at a location. 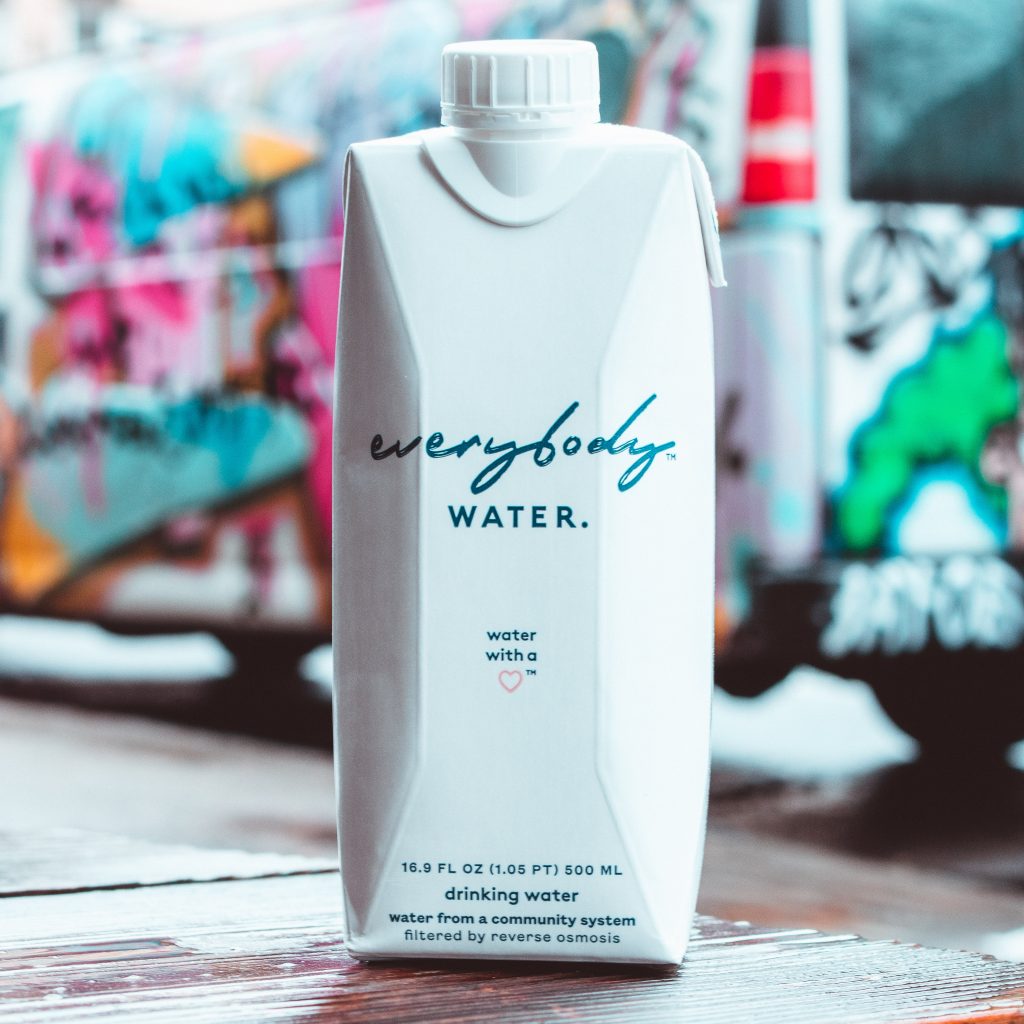 Also being careful to build locally and build up. We’re well known in Massachusetts and New England. The good thing about water is it can be anywhere. For our customers and for their clientele, it’s a huge value add because you’re ticking off so many boxes for them. It’s in a carton, which should be given. We give back to women and girls. We’re local. We’re women owned. We address one of the UN Sustainable Development Goals and a lot of the people working at those accounts are from countries like Honduras and Bangladesh where they’ve experienced this need first hand. We’re able to deliver on a lot of key points that are important to our customers, but also to their clientele.

KR: I’d add that the maintenance and sustainability of the project is crucial. Water1st doesn’t leave a region until every single person has running water in their home. They utilize local people, local resources and local engineers. They also include the purchase of land to protect the watershed. The sanitation piece is to not only promote better health but to protect the water sources themselves. We’ve found that on a small scale, other companies that we’re working with begin their own separate initiatives and fundraisers.

SM: How do you track or measure success?

KR: We were hoping to put something on the package, like this water gives someone a day of drinking water. We’re talking about full infrastructure projects. It felt arbitrary and somewhat inaccurate for such a small dollar amount. It costs about $85 a person to change their lives with an in-home clean water system. Now, with large size orders we can get the measurable impact and say, “With this order you have changed the lives of 50 people this year.” Part of that is because our giveback is based on gross sales and not profit.

SM: Is there an ambition to expand beyond the water category?

MH: That’s the direction we’re looking at now. It’s important that we have key partnerships and potentially licensing agreements. We’ve done a small clothing line. It doesn’t need to just fall under drinking water. There are so many different channels that we can use. We can make this a lifestyle or a community with products that all support water.

SM: How did you land on the name Everybody Water?

KR: We want everybody to have clean water. We feel that everybody wants to get behind that. It also has the word body in it. Water is essential to our body.

SM: What obstacles have you encountered? What lessons have you learned on the way?

MH: When you go at it with the cause, it takes on a different feel. Not only to who you’re selling to, but also to how it feeds you. When the core of what you’re doing is so defined and you’ve visited these places and you’ve met these people and you know that you can change lives, it makes it real. It makes it easier to push through tough obstacles like permits and production issues, because it’s bigger than you. When people meet us they can see it’s something we’re passionate about to our core. We’ve looked to uplift the people around us and they are also partners who believe in Everybody Water and what the community is doing as a whole.

KR: We’ve gone with our gut. That’s guided us in the right direction.

SM:  As a startup, did you think about your market strategy differently on the strength of your purpose?

KR: We knew we had to start small. We also wanted the brand to be well positioned and in front of audiences that would connect to our story. We didn’t just go everywhere. We went where we knew people who’d care and who relate to what we’re doing.

SM: What’s the next big ambition for the brand?

MH:  We are going to expand regionally. It’s super important as a brand not to go for shiny objects. You have to be really thoughtful in how you grow. Make sure you’ve got the support when it comes to warehousing, distribution and marketing.

SM: What would be your advice to a young social entrepreneur or team that wants to launch a purposeful brand?

MH: Don’t try to be everything to everybody. Find what’s super important to you as a company in terms of giving back. What’s important to your employees? Do that and do that well. Less is more. There’s a lot of noise out there. People understand it better if they can equate your brand to one type of give back. 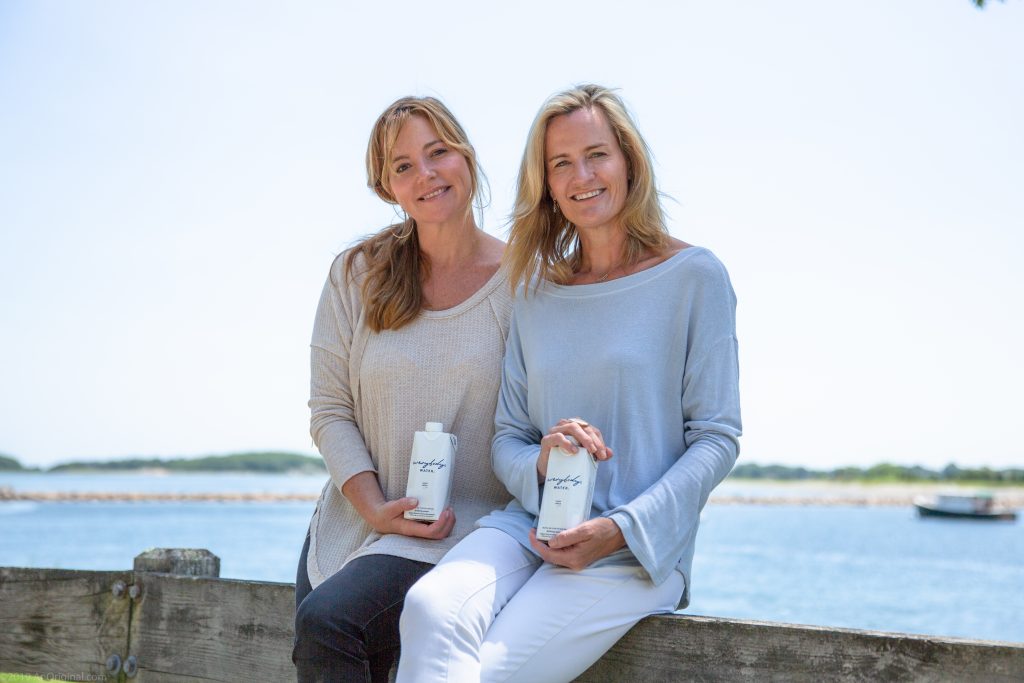 KR:  I would say that authenticity is important. Throwing money in a certain direction isn’t enough. People appreciate the story and details of exactly what the impact is and how it’s being executed. The more companies that give back, which is a great thing, the more critical people will be. Companies that we’re working with now, don’t have to create a new story by working with us. There’s a nice story and they can be part of it.

SM: How do you give your corporate partners and consumers an opportunity to be a part of that story?

KR: We have a great media team that helps us with storytelling. We’ve made videos, we have digital files, all kinds of printed materials for the right clients that really highlight that they are environmentally and socially conscious brands.

MH: We make it easy for them with tools in terms of content. We provide them with those assets, as well as do custom pieces for them.

SM: How did you create an identity that’s going to appeal to people and capture the authentic truth of your brand?

KR: We went through the branding process, a kind of deep dive therapy session. We defined our personalities and values. After that we develop the packaging logo. We tried a lot of fonts, but everything looks like a font. We needed something that was human because our cause is human. We had an artist do hundreds of samples. We’ve found that this one had that imperfection. It had these slants moving forward. That conveyed progress and forward thinking. It’s elegant but approachable.The heart relates to compassion as well as the female. We are constantly working on it. To refine, refine, refine.

MH: We actually had a package that we totally scrapped. It set us back by five months. We’re both so glad we did that. You get one moment when somebody takes a look at your product. You have to convey so many things. If it’s not beautiful and if it’s not right, then that opportunity is missed.

SM: If you were to encourage CEOs to support what you’re trying to achieve, what would you say to them?

MH: CEOs have so much on their plates, but they do want to give back in some way. I think at the core of all of us as humans, we all want to feel as though we’re making a difference, that we have a deeper purpose. Everybody Water is giving businesses an opportunity to have a big impact without heavy lifting. 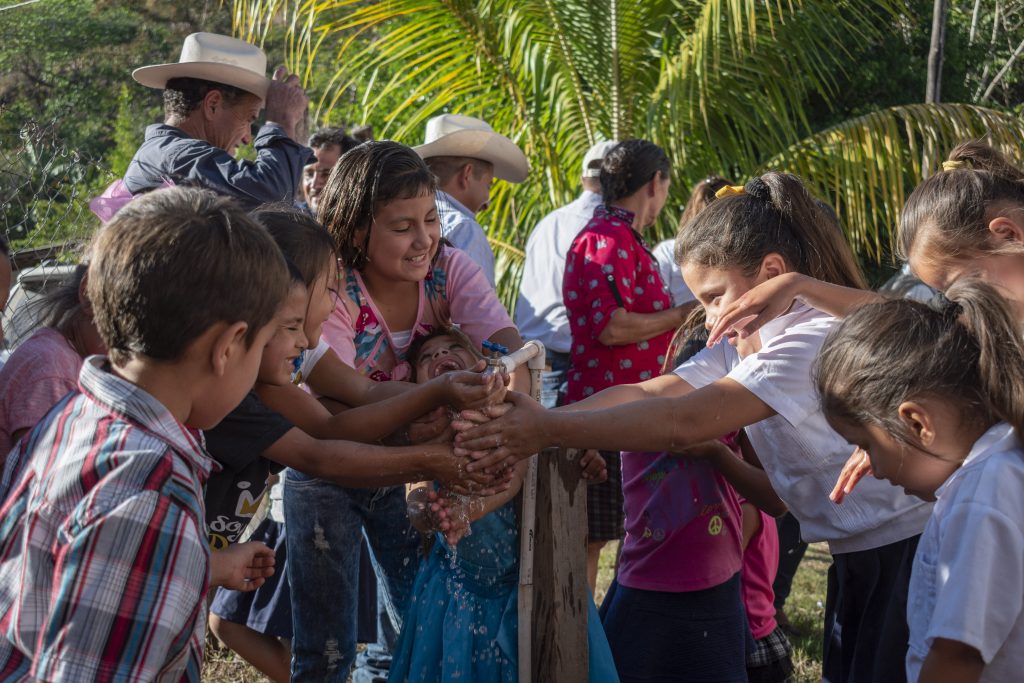 Simon Mainwaring: And if folks reading this article wanted to reach out to and connect about bringing Everybody Water in house, what do they do?

Megan Hayes:You can buy cases online from our website, contact us directly or send us a DM. We’d welcome it.