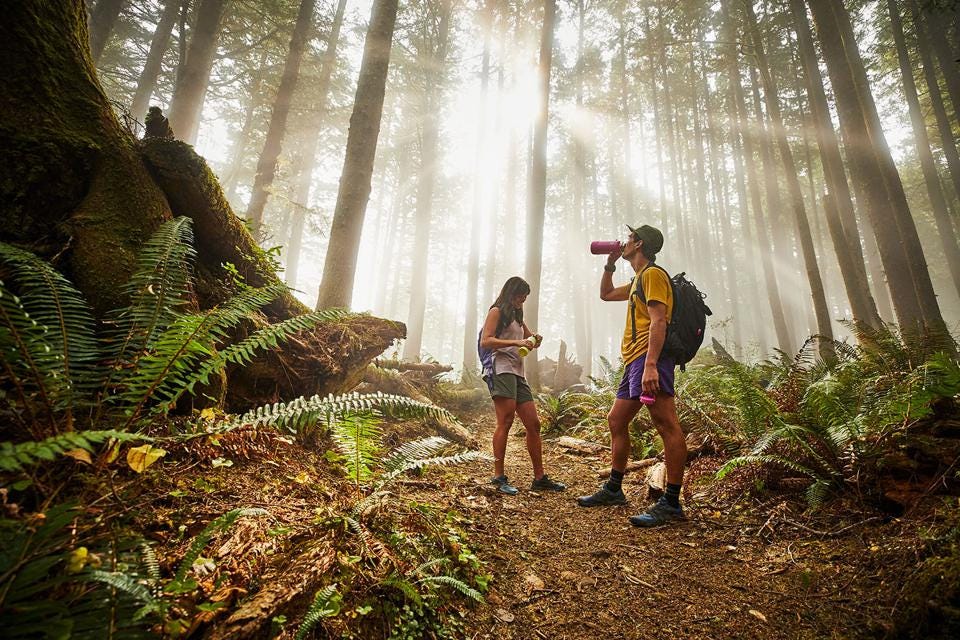 Purpose At Work: How Hydro Flask Is Raising The High-Water Mark For Environmental And Social Responsibility

In 2009, Capt. Travis Rosbach, a SCUBA divemaster, US Merchant Marine boat captain, commercial airline pilot, and world explorer — along with his then-girlfriend, entrepreneur Cindy Weber — got fed up with wasteful and environmentally toxic plastic water bottles — and the few bulky metal alternatives available at the time. Not to mention, Rosbach was not a fan of tepid water.

In short order, their Pacific Northwest startup, Steel Technologies LLC-which does business as Hydro Flask- improved on the 100-year old technology that made Thermos a household brand and perfected high-performance, double-wall vacuum-insulated stainless steel containers, ultramodern styled, that can replace single-use plastics such as water bottles and to-go containers.

What the couple could not have anticipated, though, is that within a few years, their sleek, insulated, color-coated liquid storage gear became an “it” item, a legitimate “craze,” a must-have accessory owing to the confluence of several cultural and economic trends, beginning and ending with anxiety over the climate emergency. There was also a surge in personal wellness products, and the practical desire for physically active people to keep their cold drinks cold and their hot drinks hot.

But Hydro Flask enjoyed what other startups can only dream about: early virality, thanks to the emergence and staying-power of a specific subculture of teens called VSCO Girls. Named after the high-contrast, temperature-distorting photo-editing app, no self-respecting VSCO girl would be caught without her sticker-plastered Hydro Flask, “customized strap to cap to bottle to boot,” more likely to contain Starbucks ice coffee than water.

Growth blew the competition out of the water, with one million in sales by 2011. By 2016, Hydro Flask had caught the attention of the $2.1 billion Helen of Troy, Ltd. — designer, developer, and worldwide marketer of consumer brand-name housewares, health, and beauty products such as Braun, Vicks, Honeywell, PUR, Revlon, and OXO. The conglomerate paid about $210 million for the seven-year-old company.

Is it any wonder, when water bottles were enjoying an extended “big moment” that continues to this day? Three years after Helen of Troy’s acquisition of the company, US sales of water bottles skyrocketed 42 percent to $318 million, with Hydro Flask leading the market, according to research firm NPD Group. By 2020, stainless portable beverageware sales dollars comprised more than half the overall market. Today, Hydro Flask has more than 100 SKUs and brings in double-digit millions in annual revenue.

its business philosophy and policies — and that its purpose and profits are not oil and water, but inextricably blended.

I’m citing Hydro Flask as an exemplar Lead With We brand because its purpose and practice appear to continuously move from a narrow ME focus to a wider WE focus, aiming to help the collective live, work, and grow together, in new ways that restore and protect the natural and social systems on which all of our futures depend. The company’s We encompasses nature, other species, and future human inhabitants of Earth. Says Teiwes, “We work collaboratively with consumers and engage others on a path to making simple but meaningful changes in their lives — changes that drive environmental improvements.”

What could be more “simple but meaningful” than our water consumption?

The width of Hydro Flask’s We keeps increasing. The company’s marketing strategy relies heavily on “brand ambassadors” — chefs, skiers, fly-fishers, scientists, musicians, climbers, activists, and others — who “sell” the concept and its benefits through a movement that people want to be a part of, says Lucas. They think of this as “influencer marketing,” Tiewes says.

“It’s through such “partnership marketing,” says Lucas, “through the channels and the conduits of our influencers and ambassadors and, their social media networks, as well as through larger campaigns with our partners like the World Surf League, which also has a massive reach. And it’s really just finding those individuals that align and then getting the message out in the right way so that it can be heard,” he says.

A world in hot water

Hydro Flask’s ongoing #RefillForGood campaign is its main rallying cry to help consumers ditch single-use plastics, encouraging people to make the switch — “and make a real difference for the planet,” Teiwes says. It partners with nonprofits such as the Girl Scouts of the US, to which it donated $100,000 and more than $265,000 in reusable insulated gear to get girls outside during the pandemic. It’s also a major partner of the Surfrider Foundation, with which it removes the equivalent of nearly 8,000 pounds of trash from the world’s oceans and beaches.

Such advocacy and action can’t come too soon, Hydro Flask’s leaders argue. “Because we are running out of time,” warns Teiwes.

Consider that 165 million tons of plastic now swamp the world’s oceans and that by 2050, the amount of plastic will outweigh the volume of sea life. Every single minute, the equivalent of a truckload of plastic enters the ocean. Single-use plastic bottles are the third most common ocean trash item. Beyond the well-documented damage to marine wildlife, tests show billions of people globally are drinking water contaminated by plastic particles, with 83 percent of samples thus polluted.

The VSCO Girls are onto something deep.

Come on in — the water’s fine!

More than any design award it’s won, Hydro Flask is most proud, say its leaders, of its Parks For All initiative — a charitable giving program the company created to benefit

public green spaces and promote happier, healthier lives outdoors — for everyone. To date, it’s been able to support more than 150 nonprofits and donate more than $2.5 million, in addition to lobbying for pro-environmental legislation.

The idea, according to Teiwes, is “that core of wanting to extend healthier, happier lives outside, which really comes from our founders and employees who live and believe that. From employee team lunch runs to volunteer trail maintenance days within our local community.” Hence: “For All.”

“The historical context is really important here,” says Teiwes. “The outdoors has historically not been a safe place for people of color, for example. It’s been a place where non-gender conforming folks have not felt safe. And this historical context is something that the industry is really grappling with because historically modernized communities have been excluded from both the outdoors and all its recreational benefits — the mental and health benefits of time outside — but also excluded from the outdoor industry professional groups.

“The outdoor industry, professionally, has predominantly been White men, and we are working within our organization internally to change that,” says Teiwes, “with efforts to bring more diverse talent to our teams. But we know we have a long way to go. The industry has a long way to go. The opportunity that we have immediately is through our giving program and through our external communications, to make sure that as a brand Hydro Flask is promoting not just our colorful high performance water bottles and insulated products — but a brand that stands for equitable and expanded access to the outdoors. So everybody gets those mental and physical benefits.”

Hydro Flask continuously seeks ways to live up to its environmental purpose. “Environmental responsibility has really been part of our DNA with our reusable products and our lifetime warranty that ensures that we’re creating durable products and means free endless refills,” says Lucas.

The company recently conducted an extensive life cycle assessment of its 32-ounce water bottle, in search of places to improve its embedded energy and material impacts. For example, the soap and hot water necessary for washing a reusable bottle? “It’s significant,” Lucas admits. “We can’t control that — but consumers can control it by being prudent in their water and washing.” We share the responsibility — and the potential benefits.

Hydro Flask is looking internally at its operations, at its supply chain partners, and focusing, says Lucas, on reducing its environmental impact as well as driving social benefit. “You may not know this,” Teiwes shares, “but the standard packaging of water bottles from factories to retail has been single-use plastic bags. There’s irony there, right?”

So, about a year ago, Hydro Flask began an ambitious internal project to transition to plastic-free, fully recyclable packaging. “This was not easy,” Teiwes understates. It experimented with more than 40 design iterations, and subjected them all to drop- and abrasion testing, as well as food contact standards and other criteria. “But since we started the transition to this new packaging solution, we have eliminated the equivalent of over 10 million single-use plastic bottles by weight, which I’m just so proud of the team for.” Hydro Flask was the first major bottle brand to make this change, the company says, and it hopes to promote similar transitions industrywide.

“Mother Nature is the best designer there is,” goes one of the company’s mantras. “There’s never anything extra — every choice is made for a reason. That’s our inspiration behind every product we design. Keep it strikingly simple. Simplicity drives all.”