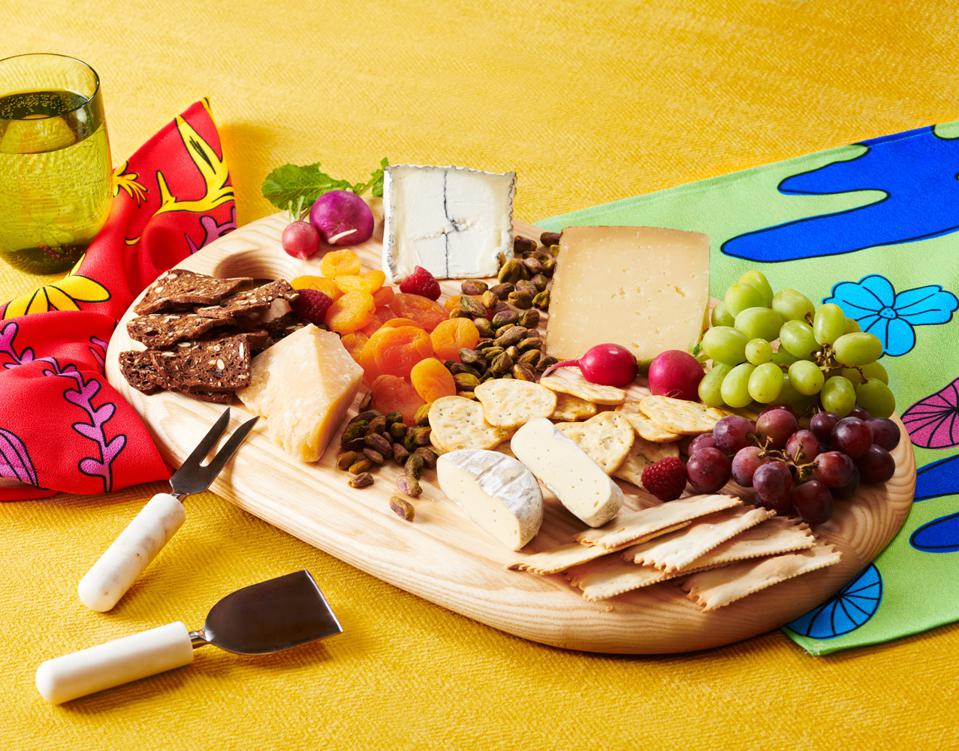 The company has developed patented tech that genetically engineers casein — the protein that gives cheese its cheesiness — from high-grade soybeans. No cows or goats bothered.

Why? Nobell proposes to replace untenable industrial animal agriculture with a more sustainable source for the proteins that make our food “flavorful and …dare we say… fun,” company leadership says.

Founder and CEO Magi Richani recalls the turning point for Nobell as “learning that unique proteins found in cow’s milk are what gives cheese its cheesy characteristics … They make cheese, cheese.”

Casein in particular endows cheese with its melting, stretching, grating, and aging endowments — not to mention its distinct taste. Casein comprises a family of related phosphoproteins commonly found in mammalian milk (80 percent of the proteins in cow’s milk and about 40 percent of the proteins in human milk). “If I wanted to create cheese without cows,” Richani has written, “I had to somehow create those proteins, but without cow’s milk. So, I went to work.”

Those years of work will culminate in next year’s launch of Nobell’s cheese, which in test after test stretches, melts, “and tastes as great as the ones from cows and goats — minus the animals,” Richani says. Because “All the ooey, gooey, deliciousness of cheese” can be traced back to that essential, slow-digesting, muscle-building casein. She told Fast Company, “We have a KPI internally for how long your cheese is stretching.”

Richani grew up in an “unstable” Lebanon, she tells We First and came to the U.S. at 18 on a “one-way ticket” provided by her mother after multiple local and national traumas.

She describes herself as “a poster child for people that have a quarter-life crisis … I realized that there’s more meaningful work that you need to pursue.” She found herself reflecting on her father’s untimely death when she was 7: “Life is too short and nothing is guaranteed. And you cannot do a job because it pays you a lot.”

But as for specifics, “I didn’t have a plan,” Richani says, besides following in her late father’s civil engineering footsteps. “When you come from Lebanon, you can be an engineer — or a doctor. Those are the only two ‘valuable’ jobs. If not, you’re kind of dismissed by society.” She always loved math and science. But “I faint when I see blood, so by default I was like, ‘I’m going to go to engineering school.’”

Richani ultimately got a fellowship at University of California Berkeley, where she received a Master’s in Engineering Project Management. At the time, “the biggest and most exciting projects were in the oil and gas space,” she says. She got recruited by Shell and became a project manager.

At the time, despite working for one of the biggest fossil fuel companies in the world, the climate emergency was still “abstract” to her, she says, as it was and still is for most people. It was only through food that she finally came to grasp the crisis in a concrete way — and start considering more sustainable alternatives.

Around this time, despite winning the occasional taco-eating contest, Richani also discovered that she was lactose intolerant. This triggered a quest to connect the dots between all her interests: education, the environment, human rights, health, science, and technology — and finally, animal welfare.

Because in Lebanon, she recalled, in addition to human rights violations, “animals were completely overlooked, and suffered the greatest.”

“And I started thinking … dairy is just so delicious and amazing, and I love cheese — so how come I’m lactose intolerant?” Richani says. “And it’s insane but most people don’t think about it …” Dairy making “is actually an insanely inefficient process. But why would you think about that, though? When you buy your milk, there are these trees and these smiley dancing cows on the package.

But “once I started looking into how we make food, how it gets to the plate, I was just horrified,” Richani says. “And I almost overnight switched my diet. I went from eating everything …to cutting out all animal products. And at the time I thought that if everyone else knew what I knew — if all these amazing people that I know who went to Berkeley and Stanford and have all these great values and advanced degrees — if they knew what I knew about our food system, then they would change, they would make different choices.”

“And the really harsh reality that I learned is that nobody changed,” Richani says. “You have to be absolutely motivated, and you have to be kind of shocked to your core to make that switch, to go to a 100 percent plant-based diet. And most people are not willing to do that. That’s when I realized that, okay, what if we gave people what they want? What if we produced the exact same products that taste the same, function the same?”

Thus Nobell Foods was founded back in 2016.

About the early days of Nobell, Richani says, “It was tough. It was really tough.” Success was dependent upon “a combination of luck plus taking action on that luck and maximizing the return on luck.”

The nonprofit Good Food Institute (GFI) “all about promoting alternative protein and helping that ecosystem grow,” recalls Richani, had “just hired a couple of scientists on their team, and they actually helped me with the initial science plan to figure out how feasible this

The nonprofit Good Food Institute (GFI) “all about promoting alternative protein and helping that ecosystem grow,” recalls Richani, had “just hired a couple of scientists on their team, and they actually helped me with the initial science plan to figure out how feasible this

was. How can we go about it? They were really helpful to me in the early days when I had that idea. They also introduced me to our first investor.”

That was pioneer vegan investor Chris Kerr at Unovis’s New Crop Capital. Kerr had earlier been instrumental in securing Whole Foods distribution for Daiya cheese. “I really think we would have a different story today if Chris was not willing” to stake Nobell’s mission, says Richani. “I remember meeting with him. It was literally an idea on paper that was validated by a couple of scientists from GFI — but he was very willing to take a chance.” He wrote a seed money check for $100,000, with a commitment to more if the company could hit key proof of concept milestones.

Then in July 2021, the company announced a $75 million Series B round of funding as it launched out of stealth, with the support of Andreerson Horowitz, AgFunder, and other investors, for a total raise of $100 million so far.

“Given the stresses, our planet faces from population growth and climate change,” Downey Jr. has said of Nobell, “we need to find new ways to feed the world. Many fine folks are working to harness the power of plants, but substitutes for some foods, like cheeses, rarely mimic the delectable distinguishing characteristics convincingly. Magi Richani and her Nobell team are putting the ‘eco’ in queso … milking a crop instead of a cow.”

These companies and others recognize along with Nobell that global dairy production emits about 3.1 gigatons of CO2 equivalent a year — and accounts for some 40 percent of global livestock emissions. In the US, the FCV reports, the dairy industry is responsible for 2 percent of the nation’s greenhouse gas emissions. “And a growing chunk of that dairy consumption is coming from cheese.”

In addition to 100 pounds of feed per dairy cow per day, it takes a staggering 144 gallons of water to produce a single gallon of milk. (“To grow the crops that feed the cows that make the milk that becomes the cream in our coffee or the cheese on our bagels.”) “Using plants to make replacements can significantly reduce the stress our cheese habit puts on the planet,” argues the FCV.

Nobell can produce more caseins per acre more efficiently, sustainably, and cost-effectively than cows, it claims.

Richani and her venture prove that We can engineer a better world through more responsible businesses. “I’ve always found that if you care enough and if you’re curious enough and you spend enough time to be obsessively learning about something, that you can get there,” she says. “As long as you’re committed and you’re willing to put in the effort, you can learn so many things that you’re not necessarily a domain expert on.”

And that’s good, says Richani, “Because we’re running out of time.” We’re about to face “disastrous consequences” if we don’t revolutionize business to become a more Lead With We proposition as Nobell is doing.

“As of today, we are not on track,” Richani says. “We’re not on track to stay within the one and a half degree increase in temperatures, which means that we’re going to trigger a lot of catastrophic events. Honestly, we should sound the alarm because we need to act much faster, and we need a lot more solutions and a lot more funding, and a lot more people from the government coming in and not making decisions based on business-as-usual and based on optimizing for financials. Because if you optimize for financials and there’s no planet to be on, then what’s the point?”

We can do this together. And if that sounds cheesy, so be it.

If you’d like to dive deeper with more purpose-led companies like Nobell Foods, check out the Lead with We podcast here, so that you too can build a company that transforms consumer behavior and our future.