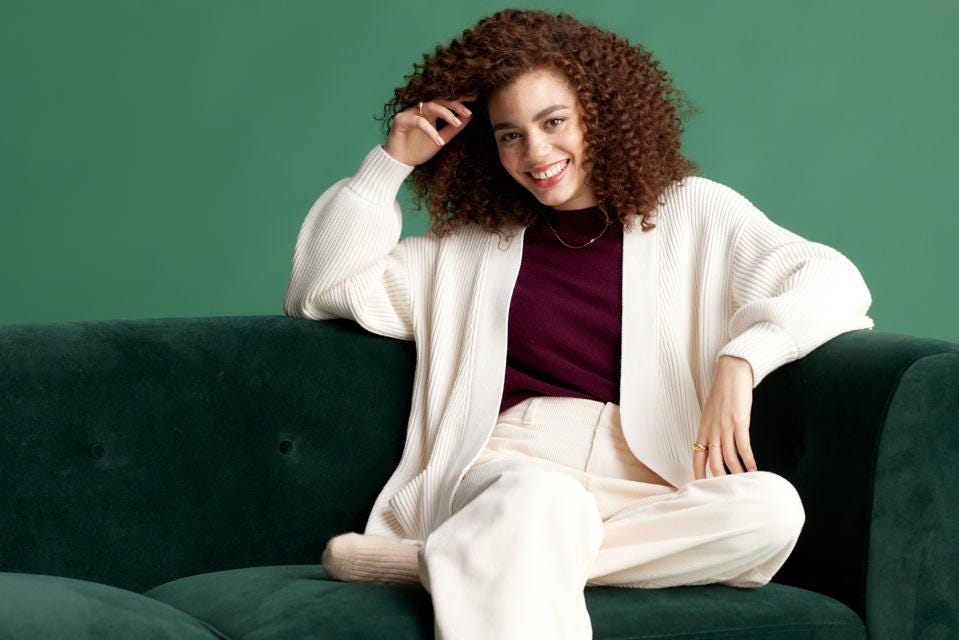 Sid Gupta is co-founder and CEO of San Francisco-based Quince, “a curated marketplace of factories” that democratizes mass access to high-quality apparel, home goods, and jewelry at deeply discounted prices, especially relative to the luxury brands its stock emulates. Because, according to the company, “quality shouldn’t be a luxury.”

Nor should environmental and social responsibility, Gupta argues. “Sustainability as a standard, not a luxury” is Quince’s motto. “Sustainability is still a ‘nice to have,’ it’s not a need to have for most customers,” says Gupta. But the world is moving rapidly in the direction of the latter, he says.

And none too soon. Gupta points to an alarming statistic: Between 30 and 40 percent of “all apparel that’s produced is thrown in landfill.” We’re not talking about the 81 pounds a year of clothing and textiles the average US consumer tosses onto the trash heap every year. We’re talking about brand new overstock generated by manufacturers to feed the insatiable demands of a fashion industry totally dependent on seasonal, if not constant, churn.

According to public interest advocate CALPIRG, textile and clothing waste is now the fastest growing waste stream in the US, and the second-worst offender in terms of water and plastic pollution. How exactly? Brands and retailers incinerating overproduced products or dumping them in landfills releases toxic chemicals into the atmosphere and water, and more and more waste piles up in landfills. Because most (c. 60 percent) manufactured clothing is still not recyclable. That’s thirteen million tons a year in textile waste. Think of a garbage truck worth of clothes dumped every second.

In 2018, international fashion house Burberry destroyed $36.8 million worth of unsold inventory, and global fashion giant H&M reported an overstock of worth $4.3 billion in its first-quarter report. And then the pandemic hit, causing massive stock to further pile up.

“It’s never sold,” says Gupta. But this “fast fashion supply-demand model “has peaked. People are starting to realize that if I buy something and I wear it once and it goes to a landfill, that’s not a good thing. That’s an immense waste of resources and a high environmental impact.

“I think the world is moving towards a slow fashion world,” says Gupta. “Is someone willing to pay more for something sustainable? I don’t know,” he says. “But with Quince, the beauty is you don’t have to. You can still pay half the price of everyone else and get something sustainable.

Sustainability and responsibility “can’t just be for this very small elite group that can afford it, because then are you really making an impact in the world?” Gupta asks.

“It’s one of the reasons I think Quince has started to garner so much share and grow so quickly,” says Gupta. “We think sustainability is for everyone.”

By cutting out the intermediaries in various ways, Quince can match supply with demand not seasonally or semi-seasonally or even monthly, but in real-time: “We’ve never had to throw away anything.”

Quince revised every part of the traditional retailer’s playbook, starting with eliminating all those “middlemen.” It manages every stage of each product’s creation, including its packaging and transportation. Essentially, Quince travels the world’s factories finding the best stuff for the lowest prices, vets the potential partner and their products, then hooks up its customers directly with those manufacturing partners, exacting a modest premium along the way.

This allows the company to charge less for what it does sell DTC. And to sell more. More Mongolian cashmere, Italian leather, Turkish cotton, and washable silk. More organic and recycled products. More eco-fibers.

Investors are paying as much attention to the company’s rapidly expanding customer base. Quince recently closed a $50 million Series A fundraising round, another early validation of its purpose and focus on building ultra-lean supply chains and robust technology investments. The round brings total investment in Quince to $65 million.

“It’s not a zero-sum game,” says Gupta. “We do few a styles and huge volume. That drives massive efficiencies for the factory, and they get a lot of benefits out of that.” For instance, they can afford to pay their workers a fair wage. “Finally, our direct shipping to the customer model is in general so much more efficient” versus the typical “zigzag to the customer. This way cuts through.” So, for example, from a carbon emission standpoint, “we think that it’s a better model.”

The birth and building of a more regenerative brand

Gupta grew up in the Bay Area, went to school in Chicago, and began his career on Wall Street as an investment banker. He shifted to private equity investing. “I basically came away from that pretty disillusioned,” he says. “I’ve always felt like I was more of an entrepreneur than an investor.”

In 2007, while researching investments, he happened upon a distressed chain of 11 retail candy stores in Oklahoma: Lolli & Pops. He pulled up his big city stakes and moved to the plains “to run this little chain of stores,” he says.

“They thought I was nuts. Yeah. They thought I was a little crazy. It’s not an understatement to say that my parents were horrified that I’d thrown away all that education.” But an education it was. He had to learn retail from the ground up, because at the time, “I don’t actually know anything about anything.

“So, I’m the store manager, I’m the janitor.” It was the definition of entrepreneurship.

“Short story is we fixed that business.” That’s an understatement. Gupta built a $50 million business in four years, ultimately operating nearly a hundred stores. He sold the majority along the way and wondered what to do next.

“My wife and I, we don’t have too many splurges,” Gupta recalls. “But one of them is when we travel, we love to stay at really nice hotels.” The couple woke up one morning in a fancy hotel and thought to themselves, “‘Why is it the five nights a year we spend in a really nice hotel, we have better sheets and better towels than the 360 nights at home?’”

“At home, we have these towels from, pick-your-internet-based-low-end-brand. We have sheets we still have from business school. And we’ve been fortunate, but we don’t want to want to spend $50 on a towel or $400 on sheets.

“At this point, I have a retail and supply chain background and my wife has a technology background, so we basically came up with the idea to take our expertise and apply it to the supply chain and make nice things available to everyone for a lot less. And that is really the purpose and stays true today, says Gupta.”

“The strategy for this then came from really a few observations. The first observation was that if you look at the last a hundred years, the biggest retail companies in the world had two things in common: One is that they had some supply chain innovation,” and secondly, they were organized and operated “in some sort of way to give people more value or discounts, right? Off what everyone else was selling the things for.

“So, we said, ‘Okay, those are going to be two guiding principles.’”

The pair recognized that society was still in the relatively early days of e-commerce, and the tremendous amount of offline business was about to migrate online over the next 20 or 30 years. “There’s a lot of commerce to be done, multi-trillions of dollars that are going to just shift to online.

“So, we want to build an online retailer. We want to play at a discount. We want to focus on the supply chain,” Gupta says.

They saw e-commerce as having gone through a three-stage evolution. “The first was just the advent of the internet and getting rid of the cost of the store, giving that value back to the customer, kind of e-commerce 1.0. Then the second, e-commerce 2.0, has been a lot of these digitally native brands, the Warby Parkers of the world” that launched and built their brands online “without a wholesale relationship. I think those brands have been mildly successful,” Gupta says. “I think that many of them have realized the limitations of being a single category business and what that means in terms of the cost structure.” Many also discovered that “they can’t remain only online — they’d have to open stores.

“And then the third phase, which I think has been the most interesting,” says Gupta, “has been the marketplace phase, the Wayfairs and the Amazons and those guys. [They found] they already have the buyers and know the sellers and so maybe we just get out of the middle, like don’t own inventory and let these guys connect with each other and we’ll take a piece of the middle.

“And so here they were,” says Gupta. “They instantly removed the highest cost piece of a retailer’s P&L. And then they were able to give value back to the customer again, which was really great.”

The Guptas intended to spearhead phase four of e-commerce with their new business. That would start with challenging a few core assumptions about the marketplace and retail in general. “The first is that all the marketplaces focused on ‘endless shelf’ — Let’s give more and more choice to the customer because that’s going to be better. And what we realized is that’s been paralyzing for the customer.

“You can type in something and you get thousands of results,” says Gupta. “You spend 45 minutes trying to read the reviews and figure it out. The proliferation of this system has also allowed a creeping and increasing amount of bad quality. Anyone can sell, so people can cut corners. Maybe they’re not even selling you a real good. So, what you have is quality going down and so much choice that it’s paralyzing.

Meantime, Gupta says, “the high-quality producers don’t know how to play in a market like that, so the customer is just worse off.” So instead of chasing “the long tail, let’s just focus on the head, the things that are traded the most. And let’s focus that demand on a few suppliers and let’s vet the quality, right?”

“The second thing we really challenged was the supply chain, which today could take months to get from the factory to the distribution center or the store. We’ve pioneered this new direct ship from factory model called MTC — manufacturer to customer — which basically hacks global logistics and builds a lot of technology that lets us talk to the factory in real-time about what’s being produced and to match supply and demand more tightly.” Hence the company never has to destroy overstock.

“Essentially what we’re doing is we are curating high-quality items. We’re shipping directly from the factory to the customer, and we’re saving the customer 50 to 80 percent off the market price.”

What’s next? Quince had to build the infrastructure behind the “transactional” aspect of its business model, according to Gupta. But now it’s ready for its next evolution. Says Gupta, “Laddering up the pyramid of

needs for folks,” the company’s working now on “how do you help self-realization and actually, transcendence?”

Gupta looks to TOMS as a model. “They were, I think, the real starting point for that, for how could you create transcendence from a brand.”

“Certainly, we serve a lot of transactional things,” Gupta says, “but we’re thinking about a lot of emotional needs that we can start to serve. We’ve been starting to think about how we can communicate and truly do something self-actualizing” for its customers.

Of course, the two levels of success — transactional and transcendent — are interpenetrating: “Are you really doing anything for anyone if no one can afford the thing that you’re selling?” Gupta asks. “That’s where I think Quince has a real opportunity to do some good, and I think the market forces are going to push in that direction anyway.”