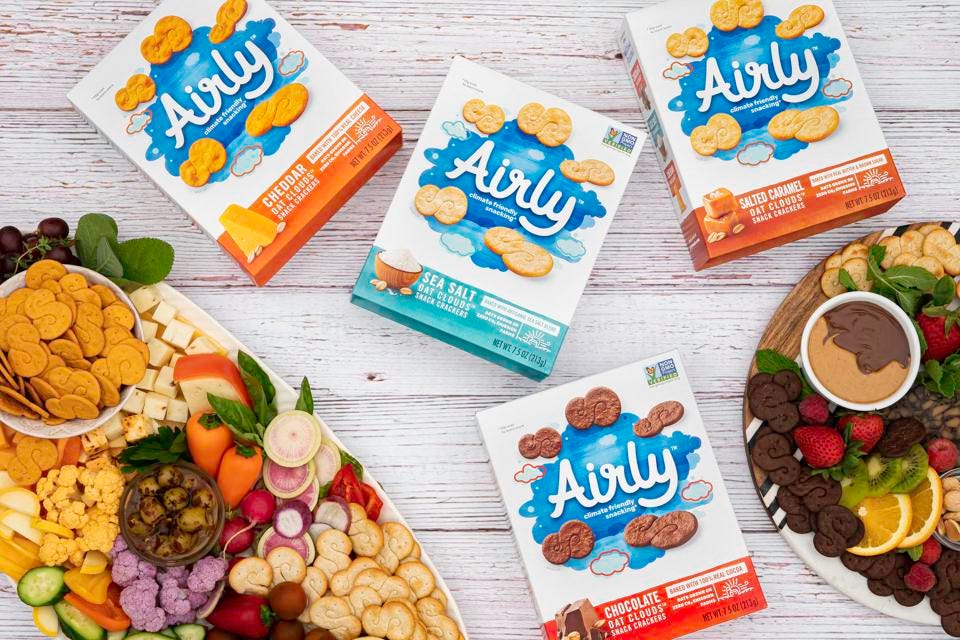 Purpose At Work: What Do 2,900 Beach Balls Have To Do With How Airly Foods Helps Tame A ‘Big, Hairy’ Climate Challenge?

We human beings are the only species with the power to destroy the natural world,” according to the Dalai Lama. As such, we share an “urgent responsibility” to protect wildlife and the planet. “We” is the operative word. And nature is the ultimate guide to understanding what We means.

During the COVID-19 crisis, We all saw indisputable proof of the interconnectedness of all things — a fact environmentalists have been yelling from the rooftops for fifty years as temperatures and waters rose, skies darkened, and our collective lungs drowned in industrial pollution.

Maybe less known is that more than a third of greenhouse gases are traceable to the global food sector. The journal Environmental Research estimates that fossil fuel pollution is the cause of nearly one out of every five deaths across the world, killing 8.7 million people a year.

Asthma. Bronchitis. Cancer. Diabetes. Coronary Artery Disease — all cause or are exacerbated by air pollution. Another global study has even linked depression and suicide to air pollution. Reducing toxic air could prevent millions of depression cases, the research suggests.

That puts at least a third of the onus to solve the environmental emergency squarely on the food industry.

Lucky for us, there are brands, big and small, making moves to solve the impending catastrophe. “We started by asking a question, ‘What if?’,” the food startup Airly’s cofounder Jennifer McKnight tells We First. With more than 15 years’ experience at Post Holdings, Clorox, Procter & Gamble, and Campbell Soup, McKnight and two partners wondered, “What if instead of trying to be ‘less bad,’ we could actually use food to reverse climate change?”

Airly Foods, billing itself as the world’s first truly climate-friendly snack food company, was the first brand born out of Post Holding-backed Bright Future Foods subsidiary. Less than a year old, Bright Future’s mission is innovation incubation in the food and beverage industry.

Post, the $5.7 billion consumer packaged goods company and third-largest cereal manufacturer in the world, home of Weetabix, Shredded Wheat, and Grape Nuts, comes with a name and reputation that does open some doors typically locked to the average entrepreneur, McKnight, Global Marketing Director of Airly, concedes — but the road to launch and these early days are no less fraught with challenges.

“We were able to do what a lot of other startups can’t do,” McKnight says. To tell farmers, “‘I will contract your grains before we’re sure that they’re really going to be carbon negative, and rest assured I have a place to offload those.’ So if our grand experiment failed and we weren’t able to do it, I had the luxury of saying, “Oh, okay, don’t worry, we’re going to send those oats over to Honey Bunches of Oats.”

Airly was founded on — and runs by — a set of four simple tenets at the core of every one of its decisions, initiatives, actions, and inactions. The tenets provide a useful roadmap for any company looking to better Lead With We:

The first tenet: The time to act is now.

To reverse climate change through food, for example — Airly’s purpose — we can’t keep putting off the project just because it’s so daunting. Start today, McKnight says. “At the risk of sounding like a Nike commercial, just do it,” she advises. “[Cofounder] Mark [Izzo] and I actually aligned on what our four values were before we ever even talked about the product and that’s been really key because it helps in all the decision-making,” says McKnight.

“We know how to make the decisions through the lens of these four values and the very first one on there was, The time to act is now,” McKnight says. “And what we fundamentally agreed on from day one, is we cannot let perfection get in the way of progress. These are big, hairy, complex challenges. I guarantee you no one company is ever going to have the perfect solution, yet it can be absolutely paralyzing.”

But “equally important is, Be transparent with where you are on that journey,” says McKnight. “So, I am not going to stand here and tell you, we have it all figured out. I think we’re doing some amazing things in the field, I think we have a really good priorities list … big things we’re working on …”

Those “big things” include innovating regenerative farming techniques such as cover crops, rotation, and carbon capture, just to start. With partners, it’s developing more accurate emissions measurements from seed and fertilizer, farm equipment and vehicles, as well as botanical carbon sequestration, all with the goal of beginning the food production process with a carbon negative crop and farm. Then working farther down the line (e.g., transportation, storage, waste) to further reduce carbon footprint.

And along the way, Airly invests in carbon credits, supporting major offset projects.

“But if we waited until we figured out how to be perfect in all of those things,” says McKnight, “we wouldn’t have ever gotten there. So, what we try to do is just be really clear about where we are on the journey, and commit to our consumer that we’re getting better every single year,” she says.

The second tenet: The food we all eat needs to be good for the planet.

Airly argues that it’s only by providing food everyone wants to eat that we can engage everyone in the solutions to anthropogenic climate change. “That’s when you can create a big impact,” McKnight argues. “It only works when it works for everyone” is one of the brand’s go-to mantras.

In the past five years, agricultural and production technologies have advanced exponentially, commensurate with rising consumer demand for more sustainable food products, and in-your-face environmental patterns and events that further move markets. Furthermore, new and more reliable advances in carbon measurement mean farmers and their partners can validate the real amount of CO2 they are — or not — sequestering in the soil — and which processes might be more effective than others.

After settling on carbon-negative oats — grains being Post’s mainstay — the cofounders of Airly set their sights on the snack food sector. “It’s shelf-stable and you can eat it right out of the box. So, you don’t have to use any increased carbon footprint to heat it, to cool it, to add other ingredients to it,” McKnight recalls.

“We ended up with crackers because they (have) a relatively short ingredient list, and that becomes really important when you’re trying to reduce your carbon footprint,” McKnight says. They’re also a widely accepted staple of Western diets.

Airly’s aim from the start was “looking for a space where we could really create a mainstream product.” Crackers and other snacks are “a big category, with high household penetration.”

McKnight doesn’t expect that selling a single box of crackers will reverse climate change. But Airly does reverse entrenched thinking, one consumer at a time. Most consumers nowadays assume, says McKnight, “What I do doesn’t matter. I don’t feel that I myself can tackle something as huge and frightening as climate change.”

But people largely underestimate the impact they can exert by a series of simple Lead With We lifestyle changes.

And yes, even that individual Airly purchase matters. “When you pick up this box of cheddar crackers, you just removed 21 grams of CO2 from the air,” says McKnight of Airly’s storytelling evolution. “But because no one has any freaking clue what that means, we try to turn it into something a little bit more relatable. So, for cheddar, 21 grams of CO2 removed from the air is like 2,900 beach balls worth of fresher air.”

McKnight credits her impact-initiative storytelling on the success of a leader of social entrepreneurship and the “one for one” giving model — TOMS. Founded by Blake Mycoskie, whose travels to South America in the early 2000s acquainted him with shoeless children by the thousands. Mycoskie decided to manufacture and sell in the US a popular and inexpensive type of Argentine walking shoe — and for every pair he sold, to give away one pair to a needy person in the developing world.

“I looked at TOMS shoes,” says McKnight. “They are for me the example of a brand that does it so well. I know when I buy a pair of shoes, a child in Guatemala gets a pair of shoes. I buy one, they give one. We were trying to come up with something that telegraphic …”

“To come up with a wholesome cracker that appeals to the masses.” McKnight says. “Because in order to have your small steps really add up, we need a lot of people taking those small steps.”

Airly worked with academics and scientists to build many of the processes it requires of its supply chain. Most notably Soil Metrics at Colorado State University, whose mission is to provide the most trusted quantitative modeling platform for assessing and forecasting soil carbon stocks in land use operations.

McKnight is one of an increasing cadre of execs who recognize that if we want to help nature, we have to study nature, absorb lessons from it, imitate it, run our lives and business according to its ways. We have to allow it to heal on its own — but with the necessary human intervention to undo the damage we’ve already wrought upon the planet.

So, the advent and success of Airly represents the Lead With We business trend of returning to the reverence of nature as wisdom. The regenerative, rather than erosive, solutions that ensue, ensure our own survival–and benefit the bottom line.

Only if you’re authentic, McKnight counsels. Especially when sharing the story of your purpose and your impact, either internally or externally, and especially when it involves something as complex and enormous as “nature,” the danger of greenwashing remains a major challenge, McKnight says. “How do we present the story in a way that’s credible, truthful, and clear to the consumer, because the consumer has been burned so many times? I’m incredibly sensitive to that,” she says.

“The other unique challenge that we have,” according to McKnight, “is we have a lot of science and technology and a really deep story that goes into how we’re sequestering CO2 at the farm level, what’s in this cracker that’s in this box, and how we’re helping fight climate change — this big, big, scary, scary thing — and, Oh, by the way — we’re fun and delicious, too!”

You have to find your own balance in your storytelling, from extractive to regenerative, from short term to long term, from self-centered to circular-systems oriented — all the while focusing on quality of product. “Purpose doesn’t matter if your product doesn’t deliver within the food space,’’ McKnight says, “because at the end of the day, it’s really hard to build a product of any scale if you don’t deliver on taste.” From the start, Airly’s mantra was “no consumer trade-offs.”

Trade-offs are the opposite of circularity and regeneration. When we nurture rather than deplete nature, the natural world repays us with abundance: a nourishing environment, vigorous economy, healthy workers, vibrant and plentiful resources. That’s the definition of growth.

If you’d like to dive deeper with more purpose-led companies like Airly Foods, check out the Lead with We podcast here, so that you too can build a company that transforms consumer behavior and our future.