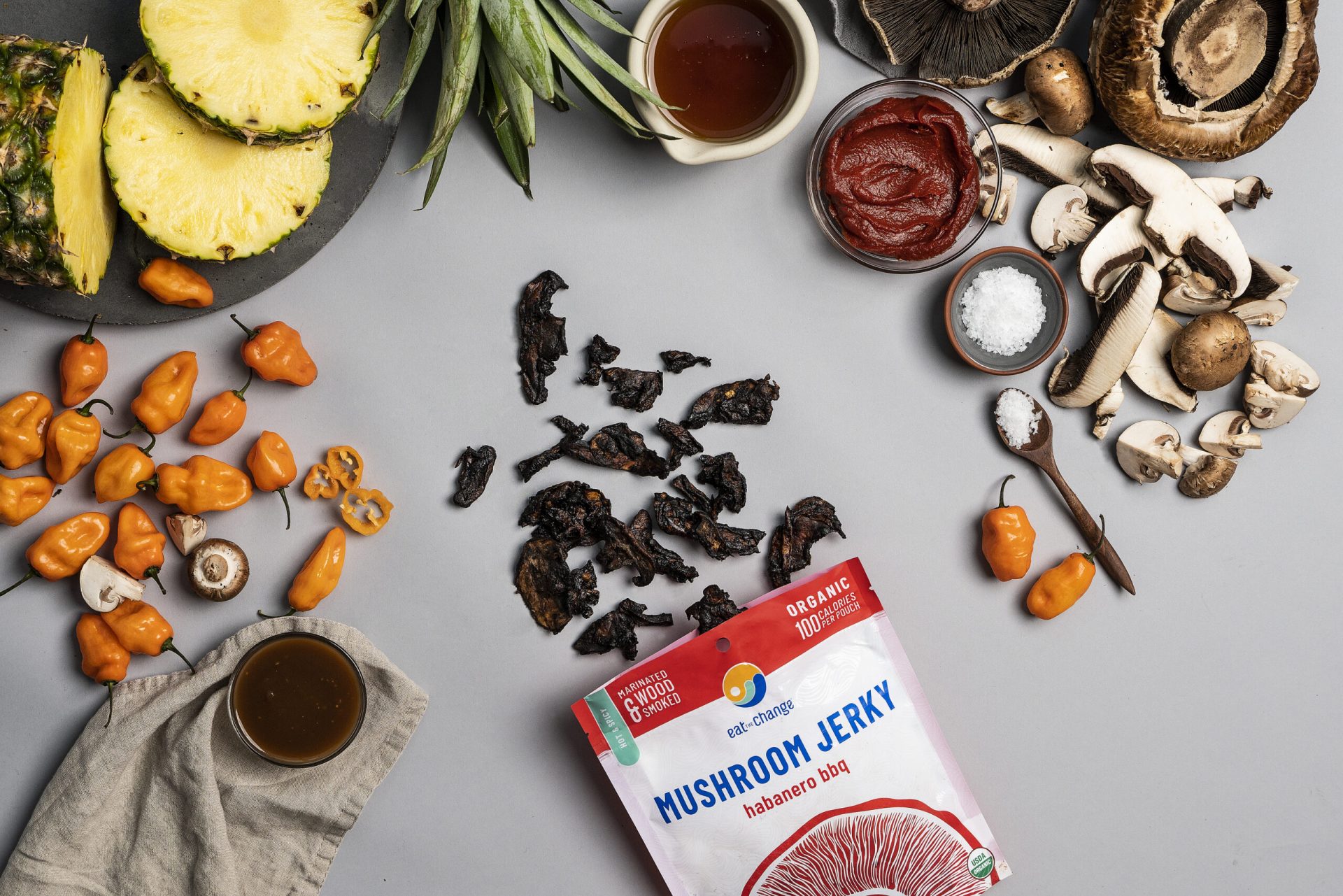 Purpose At Work: How Eat The Change Is Cultivating A Sustainable Food Movement

You need an innovative and impactful brand to carve out an advantage in a competitive industry like the consumer packaged goods (CPG) space. People today are looking for companies that make edible goods that are better for their health and the planet. Former CEO and Co-Founder of Honest Tea as well as Executive Chairman of Beyond Meat, Seth Goldman has an impressive and purpose-driven track record of building CPG brands. His new company, Eat the Change, is an exemplary case study in how to make waves and build a movement around healthy and sustainable foods.

His business experiences make Goldman an excellent example of an innovator cultivating a sustainable food movement and offer valuable insights to entrepreneurs and executives looking to Lead With We.

It’s a lot easier to stay true to your purpose if you have a foundational set of principles that guide your business strategy. To keep the company on track, Eat the Change has established, what they call, Planet-Based Commitments. The Commitments are broken down into five categories; planet or fungi-based, organic, recyclable, reducing food waste and supporting biodiversity.

“A third of crops grown never make it to the consumer’s mouth,” Goldman says. By buying imperfect foods and drying them out to make things like Eat the Change’s mushroom jerky. They also avoid using soy, corn, wheat, rice, potatoes, and sugarcane. “It turns out that those six crops are responsible for 57% of all agricultural production,” he says.

By using purpose as a guiding light, Eat the Change gains clarity on complicated decisions about everything from the products they develop to the partners they choose to their storytelling.

“The only problem was that nothing suggests it’s going to taste good,” Seth said. “I was fortunate my co-founder in this is Chef Spike Mendelsohn who’s got this reputation for crafting wonderfully creative recipes.”

The founders used the COVID-19 quarantine as a time for R & D. “My wife and I donated about a third of a million dollars last year to non-profits promoting planet-friendly diets. That was part of the incubation process, just being able to interact with those entities. I’ve always said, if you want to create a purpose-driven organization, look at what a nonprofit that you admire is doing. Figure out how to replicate that impact as a for-profit did.”

By taking best practices from non-profits and applying them to planet-friendly food businesses, Goldman is able to build successful businesses and a better world.

Companies have been re-engineering their supply chains to make better-for-you and better-for-the-planet products. However, until consumer behavior shifts, it’s never going to really transform. Eat the Change facilitates behavior change through product innovation and impactful storytelling.

“It always starts with taste,” Goldman says. “Once you get that, it’s about reaching the consumer where they’re looking for it.” To reach people where they are, Eat the Change utilizes brick and mortar as well as direct to consumer sales channels. Seth says that while eCom is important, people still buy most of their food at retail locations. Product placement on the shelf is also critical to getting people to buy your products.

“We had to put the mushroom jerky against the meat jerky. We want to get the consumer who doesn’t have to be a meat jerky person who’s thinking about mushroom jerky occasionally the same way.” To get their mushroom jerky in front of more people, Eat the Change does product sampling in stores like Whole Foods. “We’ve hired a bunch of interns this summer to go out and do sampling demos wherever they’ll let us do it,” Seth says,

With increased screen time and a bombardment of advertisements, people have become desensitized with promotional content. Brands have to find creative ways to attract eyeballs. “The day we started there were no followers,” Seth recalls. “We had a fun campaign in April, which we called the Incredible Planet Challenge. For 21 days, we listed different behaviors people can take to nudge them toward a more planet-friendly diet. It grew our followers dramatically. It also helped position the brand as a thought leader.”

Goldman says that while Eat the Change does give products to influencers, they’re doing it in an authentic way. “We’re absolutely sending our jerky to people we know who we think would speak positively about it but we’re not going to pay anybody to say something. That’s the ultimate definition of a non-authentic representation.”

Behavior change is essential to both increasing product adoption and building purpose-driven movements. It’s essential to lead with quality products, make it easily available to people and always communicate authentically.

Educating people about issues like climate change without pushing fearful rhetoric is crucial to behavior change. “You’re never going to get people to go here as a result of a guilt trip, ” Goldman says. Instead, Eat the Change focuses on flavor and craft to entice consumers. They also promote fun and catchy messaging to make their sustainability efforts known. “On Earth Day, we made a sea shanty. We got in a boat and sang,” he says. “People have told me, ‘I can’t tell you how that song stuck in my head. My child memorized all the lines.’”

From an operations perspective, business leaders are often faced with decisions that put sustainability at odds with functionality and profitability. “We are starting with a package that is recyclable but it’s only recyclable in the grocery channel where people turn their shopping bags in,” Goldman says. “Consumer safety is at a priority right now so we just can’t take a risk on a package that might have a thinner barrier but has not been proven to be safe for the consumer. I recognize the contradiction,” he continues. “When you live in a consumer economy, the definition of consume is to devour and destroy, but you’re committed to sustainability, which is to uphold life. I don’t think you can get to a place of perfect harmony. Just try to live within that and recognize that’s where you are and keep working at it.”

Today’s consumers want to feel like they are part of the solution. Brands that invite people to participate in a movement that cultivates a better world, gain consumer goodwill and, ultimately, purchases.

“Eat the Change is a call to action, empowerment and accountability, ” Goldman says. “Whenever you aren’t making mindful choices then you’re contributing to the problem. I’d like to think we’re doing that subtly in a nonjudgmental way but there’s a risk for naming a brand like this. It was deliberate.”

Another component of inspiring consumers to join you in building a movement is knowing when to speak out about what matters. “We take a stand whenever it’s relevant for our brand,” Goldman says. “With Black Lives Matter, we had a little debate. ‘Should we say something?’ And we said, ‘Absolutely.’ It doesn’t have anything to do with our mission or our brand but the reason it’s important to use those words is because Black lives have historically been undervalued. That’s the truth and we needed to say that.”

By having a clear purpose, taking actions to advance your mission and creating avenues for stakeholders to join the cause, you can effectively grow a community around shared values.

No one brand or individual can solve issues like climate change or the public health crisis. It’s critical to invite like-minded supporters to collaborate and drive progress. The food we eat is such a powerful level to impact both of those critical issues, not to mention personal health.  That said, Eat the Change welcomes people and even other brands to eat more planet-friendly diets, regardless of if they do serve meat on the table.  “We certainly don’t want anybody to be alienated from this because then we’re going to fail to gain critical mass,” Goldman says.

“There’s a myth that plant-based diets are economically exclusive. Nothing could be further from the truth,” Goldman says. “They can be more economically affordable if you know the recipes and how to cook them. The biggest barrier isn’t around economics, it’s around education and access to distribution.”

Over the last decade, consumer awareness and demand for more planet-friendly foods have increased. In 2020 alone, the U.S. plant-based food market grew by 27%, outpacing the overall retail food market, which rose 15%.

“The problem 10 years ago was that if you wanted to try plant-based, you got a Boca Burger and you would do that for a few months. Then you’d want that juicy burger. Now you’ve got brands like Beyond Meat. They’re partnering with Yum brands, KFC, Pizza Hut up in Canada and McDonald’s. You’re going to start to see these plant-based options be available in the most mainstream venues,” Seth says.

By collaborating with chains that have widespread reach, you can break down barriers to education and distribution. That is crucial to scaling any movement.

“One of the most exciting things that happened at Honest Tea was when we got Honest Kids into MacDonald’s. In the first year we sold over 200,000,000 pouches and each pouch was about a 45-calorie differential from the product that had been on the shelf before, that had been offered by MacDonald’s before,” Godman says. “We moved over a billion calories out of the American diet just by putting Honest Kids in MacDonald’s.”

Key takeaways for leaders looking to build a movement:

Conscious consumers are shifting corporate conversations. Purpose has now become competitive. Brands that use their business to advance a movement carve out a competitive advantage.

Through his experience with Honest Tea, Beyond Meat and Eat the Change, Seth Goldman is a great example of a leader moving the needle on the planet-friendly food movement. “You’ve got to define the purpose first,” he says. “Make it really clear what you’ll stand for. If you don’t have those guardrails, you’ll go wherever the winds take you. And by the winds, I mean the marketplace. The marketplace often brings out people’s worst temptations. It’s food that’s unhealthy and cheap. That puts you back on the heap of other companies contributing to the problems we have today. So define your purpose first and then use that to elevate the brand and hopefully take people and inspire them to come along with you.”