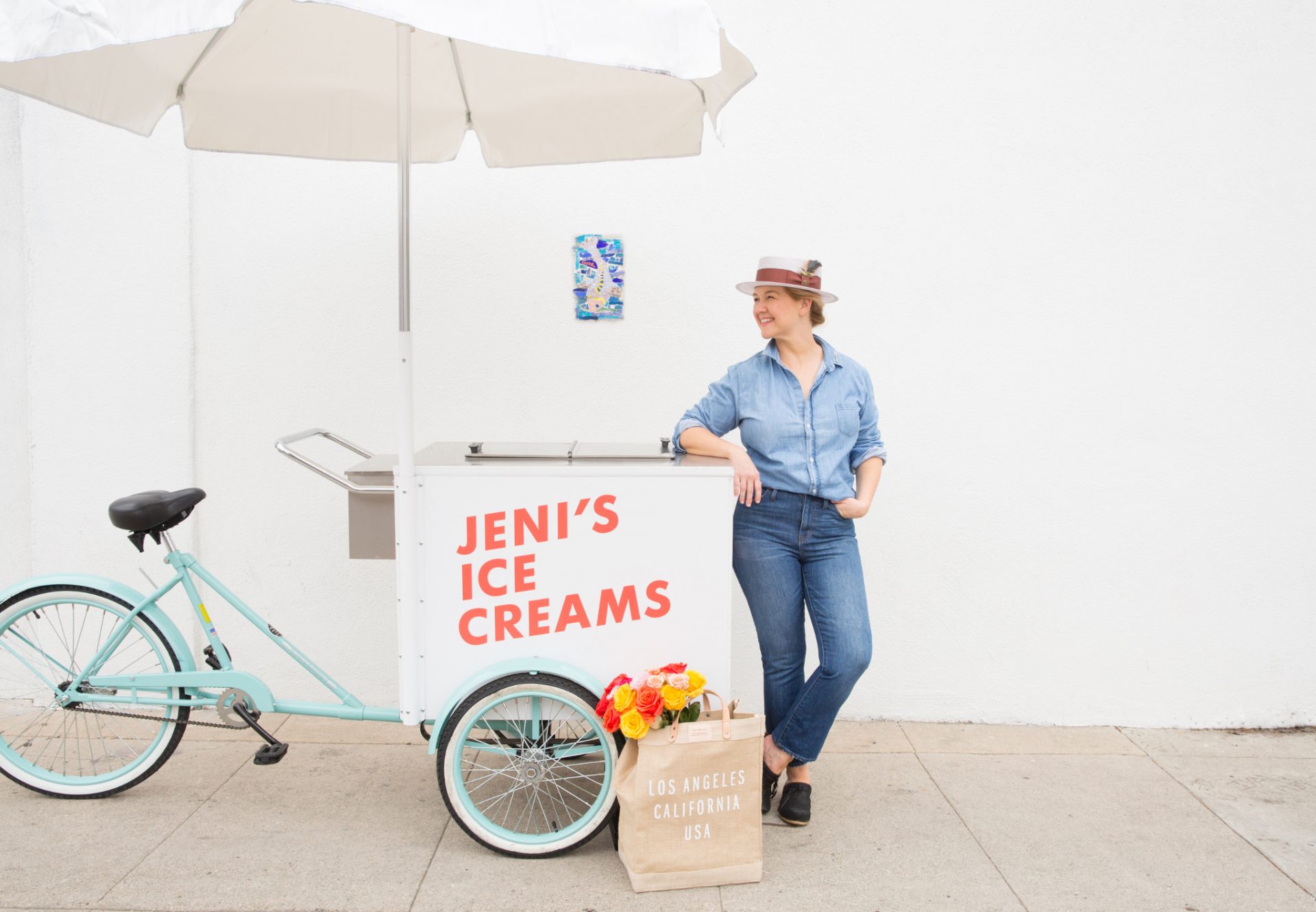 Purpose At Work: How Jeni’s Ice Cream Builds An Impactful Culture Around Its People

Companies that put people and purpose first build brand communities and consumer loyalty. In today’s crowded business environment it’s critical to distinguish yourself from the competition. While delivering quality products will always be important, consumers are also looking to support brands that stand for causes they believe in. 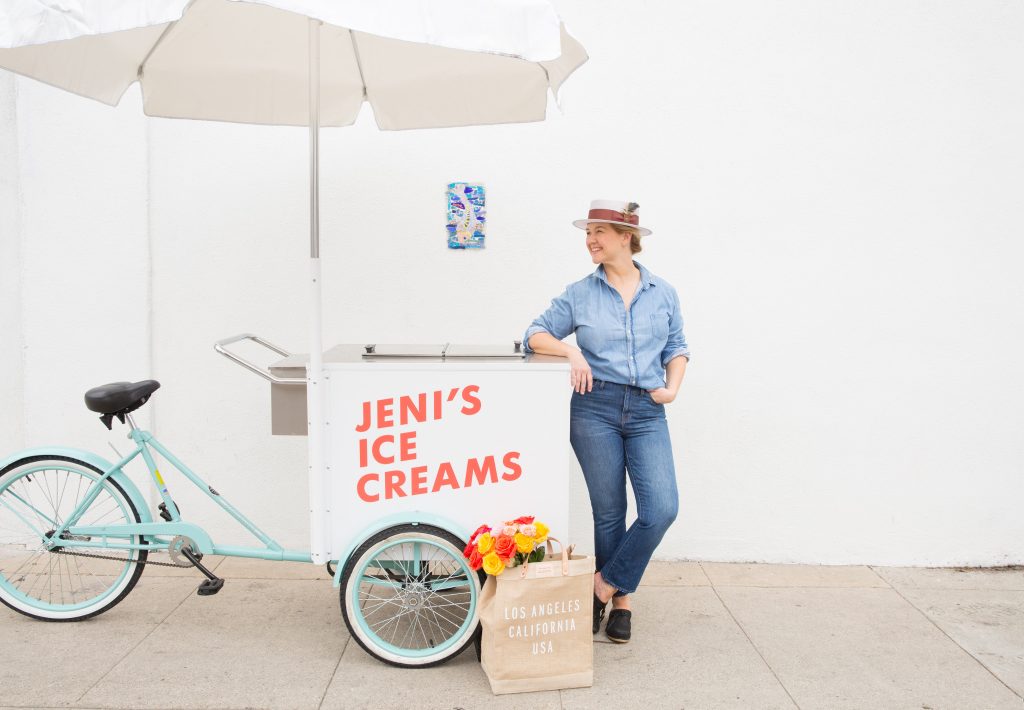 An excellent example of a company building community around shared values is Jeni’s Splendid Ice Creams. The Certified B-Corp prioritizes forming relationships with suppliers, team members, local nonprofits and customers. I had the pleasure of speaking with founder Jeni Britton Bauer about how she leads with purpose. Here’s our discussion.

Simon Mainwaring: Let’s start with how you went about creating a special product.

Jeni Britton Bauer: I quit art school to make ice cream. I was working in art, ice cream and pastry. It was all crossing over for me. Once I figured that out, I had to start a little ice cream shop.

After begging my friends for some cash and buying a few things, the only place I could start up was in a farmer’s market. I was in that farmer’s market with my prototype Jeni’s, which was called Scream. That was 1996 to 2000. Two years later I opened Jeni’s in the same place.

Everything I learned about how to make really good ice cream came from talking to the farmers. I started getting to know them, understanding seasonality, understanding their world, understanding how much they want to get paid for these things. Are they going to sell me strawberries or would they rather go to the farmer’s market and get a better price?

Most of the hours at the market weren’t busy. The merchants would encourage each other and hold each other accountable. We became like a family. The idea of community comes from that. A rising tide can lift all ships. We also have to pull others up with us. Standards are really important. Trust is important.

I was in the market making ice cream every day for 10 years. I served it over the counter. I listened to feedback. My standards became merged with what our customers were expecting. Where did it come from? Who made it? How? What’s the story behind this? To this day, that’s who we are. Every initiative we’ve got is directly tied to that time in that market.

SM: So there’s something about the integrity of that process that led you to create this special product?

JBB: You slowly build your own world because you learn as you go. It’s a different way of doing it. But people sometimes forget that boots on the ground experience. It’s where you learn everything. It becomes a foundation.

People ask me who my entrepreneur idol is. Willy Wonka. That Willy Wonka style entrepreneurship suits me. Some people go the sort of Stanford grad route. That can be great in its own way too. It’s just not me.

SM: Tell me the journey to becoming a B Corp. How did that come about?

JBB: We thought, ‘We’re already doing that. Let’s just apply and see what happens.’ We got B Corp status in 2013.

That was great because some new copycat competitors were coming into the market. We have high integrity. We would never say something is grass pastured if it wasn’t. But people who copy your business model and try to make it look like you may not have that same integrity.

The B Corp status allowed us to put a stamp on it. We went through the audit process to say that we actually are paying a living wage. We actually are buying things directly from people. We’re here to get better at that over time with B Lab’s help and guidance. That is awesome.

We don’t really use B Corp in our marketing. I actually think it takes away from the idea that we’re here for absolute deliciousness. If people want to know what’s behind the brand, the information is there.

JBB:  Having a company is like having a garden. Sometimes it’s very lush and green on one side and withering on the other. You only have so many resources to put in. You’re constantly wishing that every dollar your customer gives you is being used in the perfect way. It’s never perfect.

When we’re out at a fundraiser giving ice cream out, I think of that as marketing. That isn’t the B Corp stuff. The B Corp stuff is the hard stuff. What do you do in an extra rainy year when that spring you don’t get enough strawberries? How do you tell your customers this year the strawberries aren’t from there, but we still paid the farmer? You don’t get to tell that story. You don’t always get the benefit from being this way. But long term you do. It’s hard behind the scenes to do it.

SM: As more and more companies are becoming purposeful, some touting their claims legitimately and some doing it disingenuously, how do you distinguish yourself?

JBB: It’s definitely storytelling. We have great tools to take people inside and show them how we’re doing things. Knowing who you are and sticking with it is really important because that’s what people feel when they’re in our world. The people who work on the front line of our business, directly with customers, believe in everything we’re doing. They trust the whole company to live up to the promises we’re making. They’re proud of that. They want to deliver that over the counter along with the ice cream. That’s the stuff that becomes hard to compete with.

It’s always gone back to our relationships with our community. It’s all about focusing on people and making people feel good. Make really good stuff and get better all the time.

SM: What would you say about the challenges of being an entrepreneur and the things you’ve learned on the way?

JBB: I don’t know any founder who’s motivated exclusively by money. Most people I know are motivated by their customers and the work they do. Founders need that other worldly passion to make it all go. Building a team is also extraordinarily important.

I still work constantly because I want to. The only way you’re going to get a company off the ground is if there’s some cause bigger than ice cream, or bigger than your business.

SM: What are you doing to build a culture that embraces your purpose?

JBB: When you’re a founder everything you do has to be in service to the company. You have to have a vision. But it has to be far enough away that you’re not absolutely paralyzed when it starts to go a different way. You’ve got to keep swerving toward your vision.

What your leaders do is what everyone else does. There should be pride in the decisions that we’ve made. Because if we are, we’re going to share those with the world.

I brought in a CEO in 2009. He’s awesome. We almost never agree on anything, which is actually our strength. We want to create a strong organization. It isn’t just about the founder’s vision although you can’t let that go either. It’s a balance.

While, we’re probably not at the top end of the pay scale, we’re getting incredible talent and we have an incredible team. I think it goes back to telling our employees that, ‘We need you. We want you here. We want you to bring your awesomeness.’

I always think about fellowship. It is something bigger than the sum of its parts. I think there’s this culture of being important. Everyone’s important in this fellowship. If you get the right people in and maybe get the wrong people out quickly, then everything trickles out from there.

SM:  What advice would you give young entrepreneurs starting their businesses that want to be purposeful?

JBB:  Start small and build. You can’t break the mold or push the boundaries unless you understand what you’re doing. The only way to really get the nuances in whatever it is that you’re doing is to understand your customers. Understand the kinds of people that will work for your company. Understand the kinds of resources you’ll have and what happens when you use them. It’s okay to start with what you have now and then every day go forward. We’re going into our 18th year as Jeni’s. We’re still learning. We’re still pushing forward. We’re still doing it as if we just started.  If you’re not good at change, that’s when you become irrelevant.

SM: What has this journey been like for you on a personal level?

JBB: It’s been an incredible adventure. It’s been as hard as life can get and as joyful as life can get. I think about Frodo from Lord of The Rings when he throws the ring into the volcano. That’s the face I have half the time. But I would never trade it for anything else. I didn’t realize that the ice cream world is so competitive. I thought, ‘Ben and Jerry’s can do it. I can totally do this.’

SM: What advice would you give to a brand that’s observing purposeful companies come to market but they’re sitting on the sidelines?

JBB: People want to connect with the companies they support. It’s something about the way you make people feel. I’ve always said, ‘Make the person in front of you feel good.’ The customer, somebody working on your team, go one person at a time. It really is about humanity before it’s about anything else. Everything else will follow.

Simon Mainwaring: What’s the big goal on the horizon for you?

Jeni Britton Bauer: We’ve got a bunch of stores opening up this year. We are designing new experiences and making new flavors inspired by new cities. We have incredible non-dairy flavors winning awards. I’m trying to work on how to get kids to understand the difference between entrepreneurship and business. Teachable disciplines like finance, HR and marketing are part of business. But entrepreneurship is about passion and love and creativity. 2020 and 2021 are going to be really good.