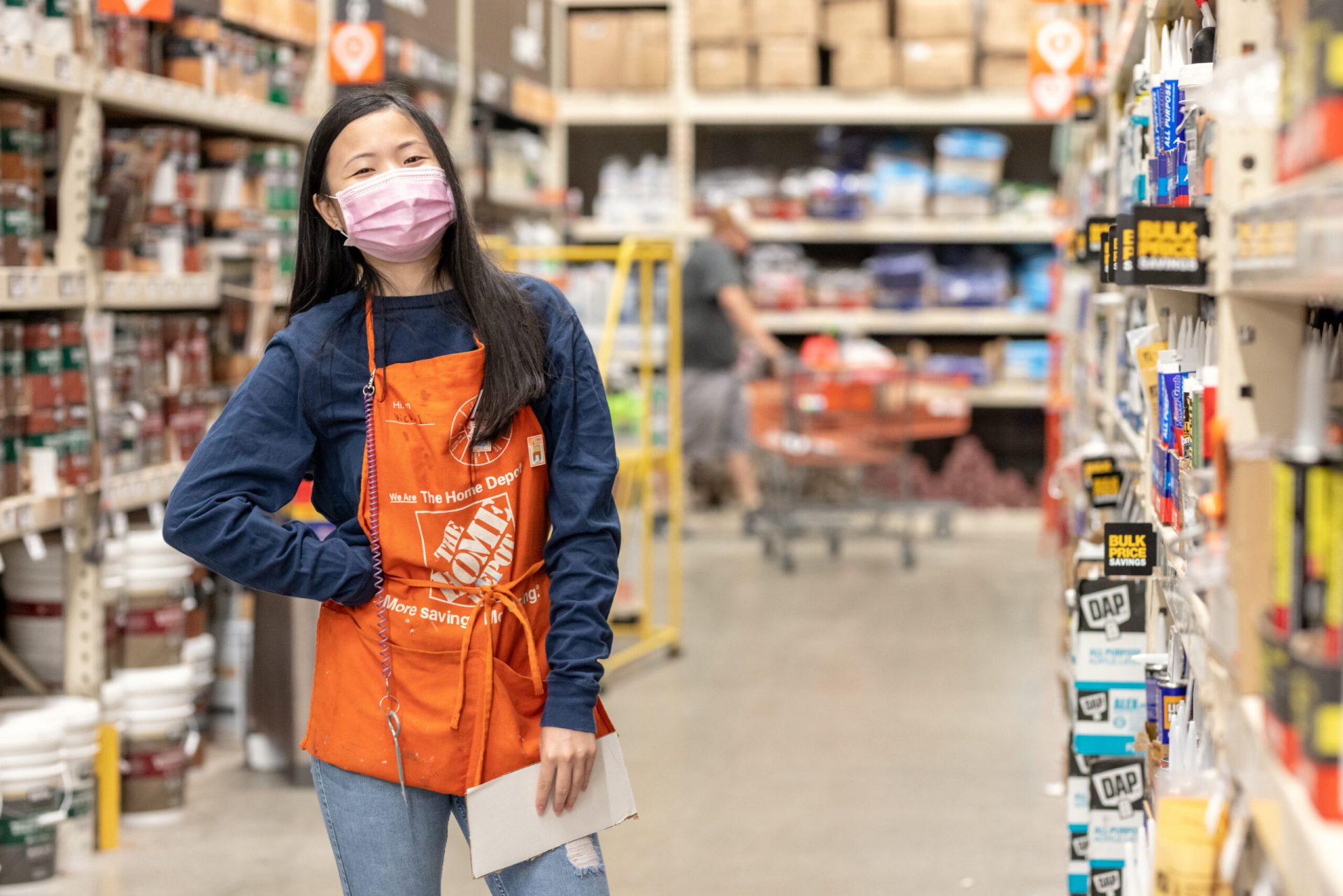 Purpose At Work: How The Home Depot Is Empowering Everyone To Live Sustainably

After “months in the making,” says Ron Jarvis, chief sustainability officer for The Home Depot, there’s a new, large-scale sustainability report from the company. It was developed in collaboration with a broad spectrum of stakeholders to respond to two kinds of their concerns: for those who want transparency, and for those who demand action. Both of those concerns hinge on the company’s goals and impact.

In terms of impact derived from Lead With We efforts, you’d be hard-pressed to find a company that matches DIY-giant The Home Depot. We know this because it transparently reports on its progress at least annually. Historically, it calls this its Responsibility Report. It includes the company’s shortcomings (“But we can always do more.”). The new progress and goals reporting is called the ESG Report: Doing Our Part.

So titled because The Home Depot aims to contribute substantially to bettering the world around ESG aspects such as energy reduction, climate change, chemical concerns, human welfare, natural resources, responsible sourcing, and waste and recycling.

Building on the SDGs

Several years ago, The Home Depot identified ten Sustainable Development Goals that align with the company’s compass of impact. It deputized a Sustainability Council comprising representatives from its entire business including associates from merchandising, operations, public relations, distribution and many more. The council receives input from multiple stakeholders including store associates, academia, NGO’s, suppliers and community members. The council meets twice a year, and its chair presents a sustainability strategy to the Board of Directors.

This year’s report breaks down stakeholder concerns even further: For example, on the environmental side, it addresses five buckets: carbon emissions, chemical exposure, deforestation, water use, waste, and recycling. The latter the company calls a “circular economy.” Says Jarvis, “We look at those and ask, are we doing adequate things? Are we doing the right things? Are we staying ahead of the curves on each one of these issues?”

Jarvis has spent twenty years driving sustainability efforts and operational improvements at The Home Depot. A company that huge, with tentacles reaching across the globe, does indeed have a responsibility to help ameliorate the climate emergency and other environmental challenges, Jarvis says, by looking, for example, at its carbon emissions and materiality throughout the entire supply chain.

In terms of the products the company sells, it recognizes the emissions embedded across all aspects of, say, the life of a Home Depot lawn mower, leaf blower, or fridge, need addressing first. So, it works with suppliers to make products more sustainable by improving sourcing, chemical makeup, manufacturing, packaging, and distribution. “We look at sustainability,” says Jarvis, “as sustainability of the world, the planet, and the business.” Note he puts “the business” last. Because, yes, business is in the business of staying in business — but that can’t happen in a world on fire.

That Home Depot philosophy of sustainability didn’t start just this year. Jarvis told We First for a July 2020 Forbes article that “In 1993, we were the first retailer to announce a check and balance system for environmental claims. If a manufacturer made an environmental benefit claim, they had to bring verification.” This set a standard for other Lead With We companies’ dealings with their supply chains.

Last year, it continued to make significant progress in energy sustainability, including reducing electricity consumption in its U.S. stores more than 14% year over year (Since 2010, it’s cut store electricity use by nearly half).

How? LED lighting upgrades, for one. And in 2020, 71 of its U.S. stores operated solar farms on their roofs. Check out the key takeaways from the report for other innovative ideas to reduce your company’s energy footprint.

Through these and other efforts, the company has decreased its Scope 1 and Scope two carbon emissions by more than 127,000 metric tons — the equivalent of taking nearly 28,000 cars off the road. In 2020, it set a science-based target to decrease its emissions to achieve a 40% reduction by 2030 — and 50% by 2035. Audacious — and doable, Jarvis contends.

They’re well on their way. Remarkably, between 2009 and 2019 the company cut more than 20 million metric tons of greenhouse gas emissions — by its customers, through improvements in products and education. It met its goal to help its customers save $2.8 billion on utility bills through energy efficient appliances. Those improvements in appliances and equipment also reduced consumers’ water use by a staggering 250 billion gallons.

With its partners, it also introduced new eco-friendly lines of products such as The Company Store’s Conscious Company Collection. And across all its SKUs in the U.S., Canada, and some other countries, it has nixed certain toxic chemicals from its paint, carpet, insulation, flooring, and live goods — and is working now on its cleaning product lines. Meantime, the company has publicly committed to 100% renewable energy at all Home Depot facilities worldwide in just the next nine years.

An interesting and meaningful statistic the company tracks is the ratio of carbon dioxide emitted for each dollar of revenue it earns. Even as the company managed a 20% increase in product volume in 2020, it achieved a 22% reduction on that metric.

Each year, The Home Depot reports that it’s absolutely against discrimination in all forms, and that it’s made strides in DI&E among its ethnically diverse four hundred thousand-plus employees — but it has room for improvement.

DI&E has taken on new urgency for the company since 2020. Its Chairman and CEO, Craig Menear, writes: “For The Home Depot, the events of 2020 highlighted, perhaps more than ever, the crucial importance of our culture.”

Although 75% of its board remains White, 35% of its hires in 2020 were women, and 53% were ethnically/racially diverse. Jarvis notes that “the greater Home Depot population is more diverse than the average American population diversity.”

But, like many companies over the past year, Jarvis and the other Home Depot leadership began to focus on the “E” aspect of DI&E: Equity. Anyone can hire (“include”) a diverse staff. “But we know that we have to pay particular attention to give equity among all groups, and to treat everyone fairly and give everyone a chance inside of Home Depot.” To that end, the company elevated its existing DI&E leader to an officer position: Chief Diversity Officer, Derek Bottoms, who happens to be the First Gentleman of Atlanta — he’s married to Mayor Keisha Lance Bottoms.

Leadership meets regularly with a diverse range of “folks inside the company, sitting down and having very frank and open conversations about what their life has been like, and how they think that as a company, we can address some of their issues,” Jarvis reports. “Even though we’re doing well, we can address those issues so we can be great for everyone.”

In pursuit of that greatness, its Homer Fund offers substantial grants to associates. In 2020, that included helping people through the pandemic, such as those who lost childcare, or needed to quarantine, or required emergency travel expenses, even spousal unemployment and — unfortunately — funeral expenses. It awarded $16.4 million to 7,000 associates facing hardships, more than $2 million of which went to those directly affected by Covid-19. The company itself invested more than $2 billion in pay raises and benefits to help lessen the pandemic’s impact on its people and their families and communities.

The Homer Fund also processed grants related to natural disasters for 12 consecutive months in 2020. Some were major, affecting many associates — think hurricanes and wildfires. Others were more localized, such as tornadoes and other severe storms, for which the fund awarded $4 million. Since the program’s launch in 1999, it has awarded $215 million in grants to more than 157,000 associates.

But even as many of its associates needed help, more Home Depot associates did the helping. Its model employee-volunteer program/foundation — Team Depot — contributes hundreds of thousands of hours and hundreds of millions of dollars a year to causes such as disaster relief and veterans’ needs. The company’s foundation is fast on its way to reaching its goal of giving $500 to veterans by 2025: Last year it hit $350 million.

The nuts & bolts: the impact on bottom line profits

How much does all this Lead With We activity cost the company? In 2009, Home Depot sales were $66 billion. In 2019, they topped $108 billion. Net earnings for fiscal 2020 were $12.9 billion, contrasted to net earnings of $11.2 billion in 2019 — the company grew, even as it expanded its mission to consider its stakeholders all people with a stake in our collective future and the health of the planet.

Indeed, “Doing our part makes us stronger,” Jarvis says, echoing a company mantra. During that same trajectory of tremendous growth, the company’s negative environmental impact declined considerably — at the same time, it kept its position as the top U.S. home improvement brand. “We’re going to continue that trend,” Jarvis predicted in 2020 — before the pandemic hit.

Now, given the uncertainty over lockdowns, global health, and shifts in consumer behavior, the company’s been unwilling so far to make any predictions about continued growth in 2021.