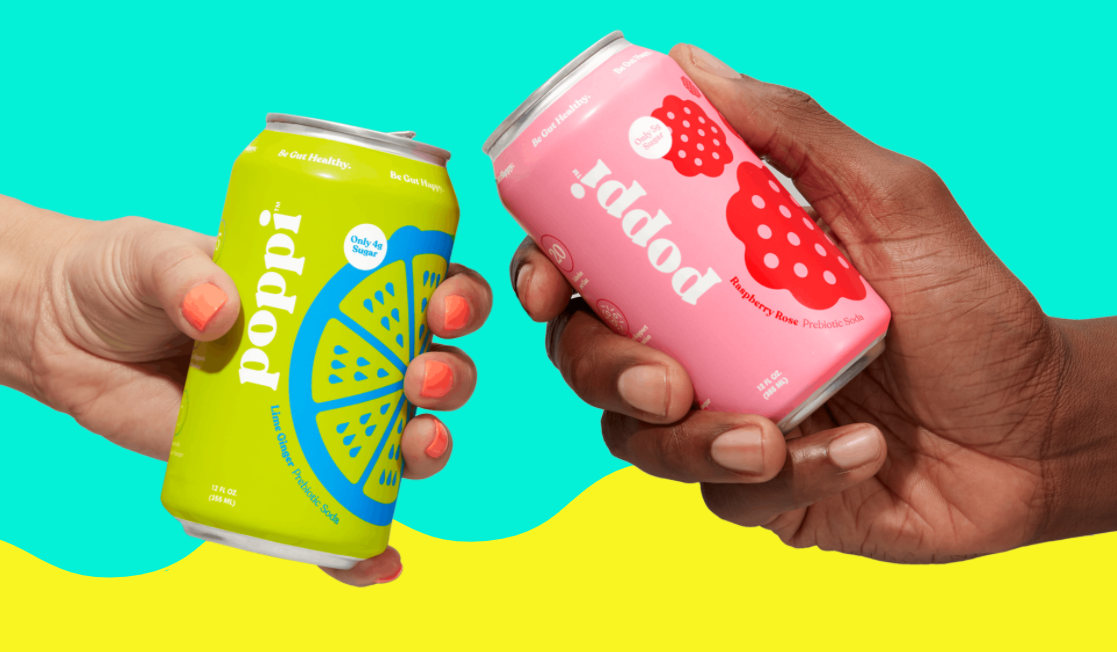 Purpose At Work: How Poppi Leverages Purpose To Bring Health To Soda

Businesses that tackle pain points and meet consumer needs in new ways can gain market share and loyalty. A brand that’s driven to disrupt the carbonated beverage category is Poppi.

The company packs prebiotic health benefits with natural sweeteners to produce a low sugar alternative to traditional soda pop. “I was interested in what food does for your body as medicine versus going the traditional route,” Poppi’s co-founder, Allison Ellsworth, tells We First. “We plan to really democratize healthy soda,” Stephen Ellsworth, Allison’s husband and co-founder, shares.

Consumers are looking for healthier alternatives. With annual global demand for carbonated drinks worth $400 billion and growing, Poppi sees an opportunity to “disrupt big soda,” Allison says. After launching in March 2020, its early wins with retailers like Whole Foods and Sprouts have helped the fast growing startup face the challenges of launching during COVID-19.

Power couple, Allison and Stephen Ellsworth’s journey with Poppi’s fast track to growth offers valuable lessons for business leaders and entrepreneurs looking to Lead With We. 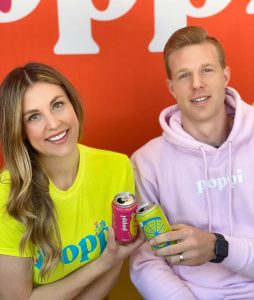 As the adage goes, necessity is the mother of invention. About four years ago, Allison was facing stomach problems and other health issues. Doctors couldn’t figure out what was wrong. She did some research and discovered that apple cider vinegar stimulates gut health and detoxification.

After 2 weeks, her stomach felt better. “It literally changed my life. It sent me on this road of health and wellness.” The biggest problem was that Stephen and others were put off by the vinegar taste. “So, I said that if I want to drink this every day for the rest of my life, I have to make it taste better,” she says.

Allison took to the kitchen. “I love to cook and I wanted to create something that was healthy and tasted good,” she says. At first, finding the right flavor concoction was just for her personal enjoyment but an opportunity presented itself.  She started talking about it and people placed orders. “I was often having neighbors and friends say things like, ‘Wow, this helped me,’ or ‘I’m not drinking as much soda,’” Alison recalls.

Just two weeks after taking the concoction from her kitchen to the Dallas Farmers market, Allison and Stephen were approached by a Whole Foods buyer. “She was shopping there with her mom and tried our product at the booth. She loved it and said that we have to be in Whole Foods.”

That was the first time the couple really started thinking about Allison’s hobby as a real business.

“The hardest part is taking that leap,” Stephen says. He and Allison quit their careers as oil and gas researchers to launch Poppi. “We used our life savings and we racked up our credit cards. You’ve got to throw yourself into the fire where it’s forcing you to commit and the easiest way is forward, not backwards,” he says.

After getting a loan for a production facility from Allison’s sister, they began self-producing products. Shortly after the duo was able to pitch on Shark Tank while Allison was pregnant in her last trimester. “We got a deal on Shark Tank and just kept pushing,” she says. “You’ve got to have a lot of grit and determination,” Stephen adds.

While some people might think it would be difficult to work with your husband or wife, it’s working well in Allison and Stephen’s case. “We’re opposites,” Allison shares. “I’m the creative saying, ‘Let’s do this. Nothing can go bad. Why not try it?’ He’s like, ‘Okay, let me get my spreadsheet. That’s why we make a great partnership.’”

Carving out a competitive advantage

To distinguish themselves in the beverage industry, Poppi combines design, product and purpose. Our primary focus was on creating a tremendous product that was effective and tasted great,” Allison shares. Poppi has rebranded since the farmers market but their brand personality has stayed the same. “We had this really fun and vibrant brand and a product that people could relate to. People love it and it was created with ingredients that people knew to be effective and beneficial to their body.”

The Ellsworth’s invested in due diligence, “making sure we were using good ingredients that were crafted by our suppliers. We took a lot of care about how we made the product,” Allison says.

The deal with Rohan Oza on Shark Tank was also a great help. “He’s built brands like Bai, VitaminWater and SmartWater. He’s kind of been branded as the ‘Brandfather’,” Stephen says. “It’s super important to know your personal limitations. Make sure you surround yourself with smart people that can assist in growing the business.”

“In a hyper competitive category and it’s making sure that you have the right team that can help navigate those tricky waters,” Stephen says. “It goes down to having a great product that stands on its own, then pairing it with a culturally relevant brand, and having the right management team to execute against those two.”

Competition with sugar-laden soda giants present both challenges and opportunities when it comes to gaining market share for Poppi. On the one hand, big players try to dominate retail shelf space. “They kind of box us out of the real estate that we should be playing in,” Stephen says.

On the bright side, consumers relate to the founding story and authenticity that comes with Poppi. “Big brands cannot quite relate to the consumer as they did 20 years ago. They tend to buy brands like ours down the road, instead of creating their own products. It doesn’t have that personal connection that I think people need nowadays,” Allison shares.

Poppi also won packaging awards at BevNet, Dieline and others. “It’s like a piece of art. We literally think of this as a fashion statement that people want to be seen drinking. Kids are now spending more money on food than they are their clothes. You take a picture of your clothes. You can only wear the outfit once because you posted it. They’re invested in their health and wellness. We’re tapping into that younger Gen Z and Millennial populations,” Allison says.

In addition, Poppi positioned itself as a digital first brand, even before the pandemic,” Allison says. By investing in Instagram, TikTok and other online media platforms, Poppi is able to stay on track with youth culture.

Launching a business during the pandemic

“We were supposed to launch in Whole Foods in March last year,” Stephen shares. “Brick and mortar sales didn’t really start happening until June,” Stephen recalls. “COVID-19 has presented hurdles for everyone. Despite the pandemic and recession, Poppi is growing.”

“We had to be nimble. That’s an opportunity with a startup,” Stephen says. “Some of these businesses emerged during recessions because you see the collapse of these bigger brands that have massive overhead. When the sales take a dip, they’re unable to support it, so there’s layoffs and there’s all sorts of other things that happen.”

Because they were small, Poppi was able to reallocate funds and pivot rapidly to invest more on digital and ecommerce strategy.

“The store growth is exciting as well as the doors we are going to be in soon,” Allison says. 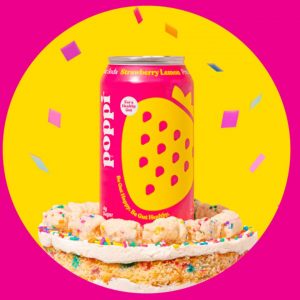 At first, the challenge was getting people to try it. “Back in the farmer’s market we would say, ‘Try this. It has apple cider vinegar.’ People would say, ‘Oh, I don’t know. Is that going to taste good?’” Allison recalls.  With increased growth comes new pain points. To meet increasing national demand, Poppi has had to transition from in-house production to working with co-packers.

“As we think about meeting the demands of these other retailers and this growth we have planned for 2021, it is through those partners and the right agreements that we can meet demand,” Stephen says.

A big lesson from the early days was not to grow too fast, Stephen says. “We didn’t have the production to support it.” There’s a desire to scale but it has to be well planned and be right for the business over time. “It’s been particularly challenging because of the pandemic and just how tight aluminum cans are.” The founders explain that with many of the big companies purchasing cans from the same manufacturers, they run a risk of not getting the product which is being bought up by companies like Budweiser or Coke.

“You also want to grow your team to be able to support it and you want to hire people that can be with you for the long-term and build a company culture,” Allison says.

“We live to inspire a culture of happiness, one delicious drink at a time,” Allison says. “Happiness comes from connecting through human relationships. Happiness comes through doing good things for others. It comes through doing good things for yourself.” In addition to the health benefits that come from drinking Poppi over a traditional soda, to act on its mission, the brand makes select purposeful contributions.

“A lot of the instances in which we actually give back, we don’t publicize. It’s part of that human contact and inspiring happiness,” Stephen says.

Lessons on how to turn ideas into actions

Allison and Stephen’s journey of scaling a purpose-driven startup offers insights that other innovators and entrepreneurs can put into action. Here are some key takeaways: