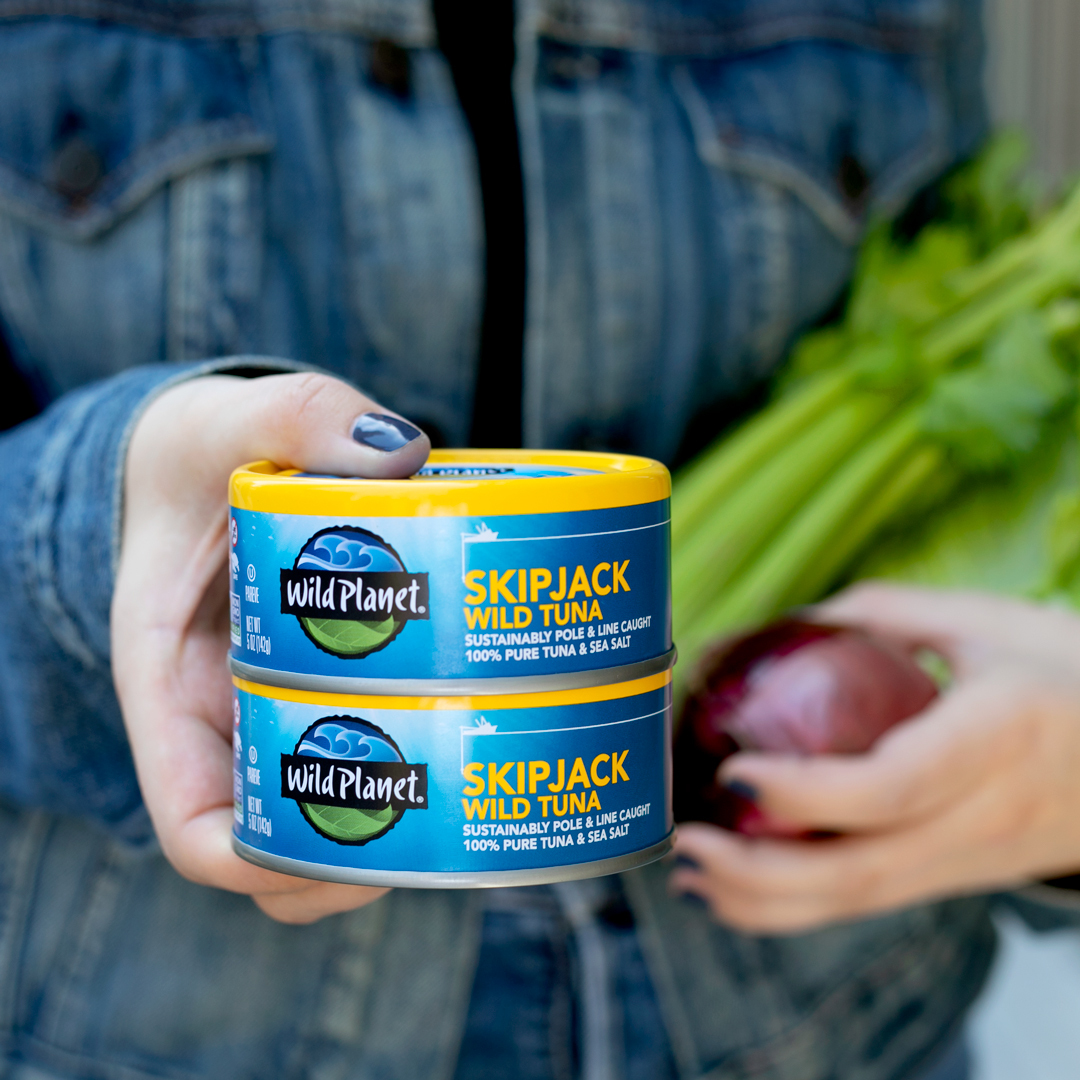 Purpose At Work: How Wild Planet Foods Is Creating Sea Change In The Fishing Industry 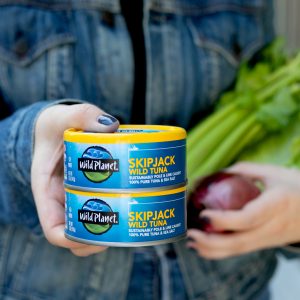 McKinleyville, California’s seafood industry veteran Bill Carvalho co-founded Wild Planet Foods in 2005, after years of exasperation with the unsustainable practices he witnessed — and sometimes reluctantly practiced — in his industry.

A seminal family visit to the Monterey Bay Aquarium had rocked his boat. “In 2001, I really had an epiphany,” Carvalho tells We First. The aquarium was featuring a display called Oceans in Crisis. “I came out of there with the resolve to be an insider, to extend the olive branch to whomever would be interested in shifting to the right way of treating the oceans.”

As president of Wild Planet, Carvalho, like many Lead With We entrepreneurs and executives, realized that nature provides a model for abundance through regeneration and circularity. But its flourishing depends on humans not destabilizing its delicate ecosystems. “The name Wild Planet came to me as I realized that the planet is in its best, most productive condition in its wild, natural state. We cannot continue to domesticate it, tame it, and just ransack it for immediate gain with impunity,” he says.

In 2006, a Forbes.com article called attention to ocean depletion, arguing that the 1 trillion to 2.7 trillion fish caught from the wild and killed globally each year (not counting farm-raised fish), account for about 40 percent of all animal products consumed — not counting sports fishing catches. It also referenced a now-infamous global survey that warned “we could see seafood vanish altogether by 2048.” That claim, originally published in Science, came from the study undertaken by an international team of scientists and economists who scrutinized “the role of marine biodiversity in maintaining ecosystem services.” The study’s lead, Boris Worm, told National Geographic that “Biodiversity is a finite resource. We are going to end up with nothing left … if nothing changes.”

Wild Planet’s ethos is defined by the idea that “the world we leave behind is what matters most. Will our legacy be a gift or a crisis? What kind of ancestors will we be?” So, the company is working to reinvigorate the oceans not only by its own practices, but by revolutionizing its industry. “From day one, our vision has been to transform fishing into a force for good.”

Starting as a little fish in a big sea, Wild Planet has grown into the fourth largest canned seafood company in the US. It’s oceans away from Carvalho’s family’s long tradition of fishing: “My Portuguese ancestors, my grandparents from the Azores islands, ‘canned’ tuna,” he recollects. “Just pure meat in a glass Mason jar, pressure cooked. So, I knew how good tuna could be. My first foray into the canned seafood world [Carvalho Fisheries] was to do this pristine, raw packed, cooked-in-its-own juice product.”

The company flourished. But Carvalho says, “I sensed over the years that I needed to tell not just the story of premium product — but the story of sustainable practices. “The problem is that the word and message of ‘sustainability’ — which incidentally was not even in use in 2001 (We called our seafood ‘eco-friendly’) — has been degraded.”

“Companies that now are articulate and conversant in ‘sustainable speak’ are still trying to hijack what it’s going to mean. And their target for sustainability, instead of being a 10 — which is what I put it at in 2001 — their target for sustainability is to move the industry from a one to a three. Why? “Because they are fundamentally dependent … for the bulk of their production,” on the wasteful, catch-all, distant water fleets using radio beacon devices, purse seines, and long lines to aggregate and haul whatever marine life turns up, whether it’s a bluefin or an endangered sea turtle, Carvalho says. “That’s the biggest problem.”

Yes, says Carvalho, “there has been lots of progress, and there are those who fully understand sustainable selective harvest that targets the right species of the right size, and that doesn’t result in the destruction of non-target species or non-target-size fish. And there are those [consumers] who understand that and support Wild Planet and other brands that practice it.” Nevertheless, the sustainability label “has been hijacked. There are eco-logos that certify a much lower standard, and that creates this environmental equivalency with the high standard, which erodes it — It’s a race to the bottom then.”

In other words, even when you spot a brand under a supermarket’s “Sustainable Seafood” sign, you don’t necessarily know whether, like Wild Planet, the company’s committed to not fishing in proposed high-seas sanctuaries, instead using other sustainable fishing techniques, such as pole-and-line and trolling, which greatly reduce that “bycatch” of other marine creatures (e.g., turtles and dolphins). True sustainability begins and ends with selectivity, says Carvalho. You also need diligence and care, the company states.

A cornerstone of that diligence and care is its leveraging of the scientific data and guidance it gets from partners such as the David & Lucille Packard Foundation and the Monterey Bay Aquarium where it all began.

It’s also evident in Wild Planet’s involvement in the fish selection process from dock to shelf — diligence and care that run deep. They know the fisherfolk, boats and boat owners. Through its partnership with Trace Register, the company can track each boatload of fish from the moment they reach the dock until it’s delivered to the store shelf. That’s particularly impressive, given that Wild Planet is a global operation. Its Sockeye and Pink Salmon products, for example, are canned in Alaska, near the fisheries. But it also partners with state-of-the-art facilities in Vietnam, Thailand, Morocco, Ecuador, Cape Verde, and Spain. This full-chain traceability allows Wild Planet not only to fulfill increasingly stringent regulatory requirements — but to build that X-factor every company needs: consumer trust. 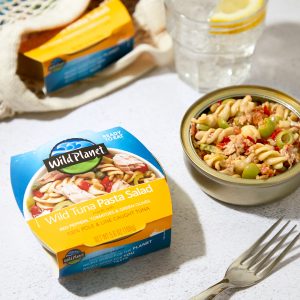 In the beginning, Carvalho spent several years swimming upstream against doubt and adoption difficulties. At first, “Everybody told me you are never going to be able to sell a can of tuna for five dollars. You’re crazy. This is a bloodbath category. The margins are small. You’ll never compete. You’ll never survive.”

But by coincidence, Carvalho says, “I had read a book, Blue Ocean Strategy: [How to Create Uncontested Market Space and Make the Competition Irrelevant] We made the competition inconsequential by living where they cannot exist. The blue water that I lived in was the highest sustainable practice, highest quality of product. And Boy Howdy! is there an audience for that kind of quality and premium.”

That enthusiasm grows by the day, as new generations demand more of companies. “People are very interested in learning,” Carvalho says. “They want to do the right thing, they aspire to conscious consumerism … they love to find a brand that has credibility, that has transparency.” Wild Planet’s labels provide a font of detailed information, and the company tells its story by celebrating local communities and fisherfolk, and clearly communicating its real-world impact.

But, ultimately, it’s not what’s on the label or the website that matters most to consumers. It’s what’s in the can. “Had we had only sustainability as our story, we would never have succeeded,” Carvalho reflects. “We had to have that premium product. So, to get our products on the shelf, we had two stories to tell.”

The quality of the fish remains one of three touchstones for Wild Planet’s leadership. The other is the quality of its 51 associates. And then there’s the well-being of people and the planet.

“Many brands will tell this whole story,” says Carvalho, “but when I first look at a competitor, I go to the ‘Contact’ page or the ‘About Us’ page. And if it doesn’t say anything about human beings … then I completely question it.” Carvalho makes it a point to give out his personal email address, and he’s proud it’s on the Wild Planet website. “We are transparent … contact us. We invite consumers to ask me anything or to share with me anything they wish to share.”

Wild Planet wants you to think beyond tuna. Or, more precisely, to think below tuna. One of the company’s audacious missions is: “We would like to have consumers recognize that the human race should be consuming from the ocean pyramid food chain — down at the bottom. The bottom has all these marvelous fish: sardines, anchovies, mackerel, herring, smelt. All these wonderful fish are the answer,” argues Carvalho. They should be eaten by us, not treated “as resources to extract tiny pills of fish oil, and then to dry their bodies and create a fishmeal to then feed to something else.” That’s an unsustainable waste of protein “because we want to eat an Atlantic farmed salmon instead of a mackerel filet.”

“So,” says Carvalho, “we are trying to produce new things, new ways to eat mackerel, sardines, anchovies, herring, and we want to educate people that eating lower in the food chain is the most responsible thing. That the whole ‘plant-based fish’ movement operates on the premise that there won’t be enough fish in the sea to keep eating real fish, so let’s eat laboratory fish. No, let’s shift and eat low-on-the-food-chain fish — just like salmon [and tuna] do.”

Scientists believe some tuna species are endangered (highly vulnerable to extinction) — but traditional fisheries managers still allow commercial fishing to target it “with almost unmatched effort,” according to Oceana, an international organization making waves in protecting the world’s oceans.

Such protection of our oceans, counsels Carvalho, requires us to think beyond their boundaries. Because when land-based animals, such as chickens, are raised and harvested organically, these practices positively impact the health of our oceans, too. Indeed, large-scale livestock operations and factory farms — in addition to being disease vectors — also cause significant ocean “dead zones” off US and international shores from manure and fertilizer runoff. Ameliorating this problem will require not only governmental regulations, but business and consumers changing their behaviors in a big way.

For Wild Planet’s land-based products, the company works with organic partners who avoid the use of herbicides, pesticides, and chemical fertilizers that could enter our waterways and ultimately damage our oceans. “We consider organic agriculture to be the land-based equivalent of sustainable fishing,” Carvalho says. For example, Wild Planet Organic Roasted Chicken Breast is canned in Georgia, near the sustainable family farms where the chickens are raised. What you find when you pull the tab — which by the way is not always easy, for good reason — is pure, skinless, boneless USDA certified organic free-range chicken breast meat that was roasted right in the can with a dash of sea salt. No liquids, starches, or other fillers are ever added, according to the company. 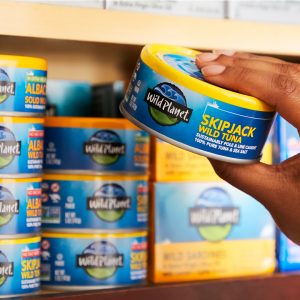 What you can do to help turn the tide