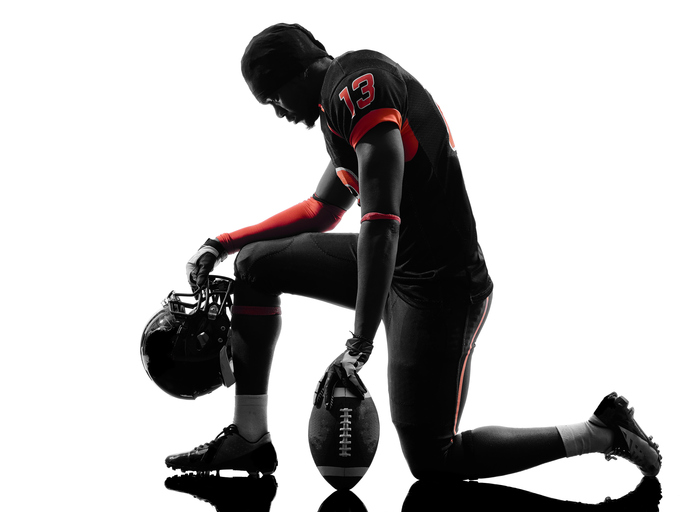 Last year, San Francisco 49ers quarterback, Colin Kaepernick, got down on one knee and refused to stand for the pre-game national anthem. His reasoning? He “did not want to stand up to show pride in a flag for a country that oppresses black people and people of color.” Fast-forward to last week Sunday: more than 200 players took a knee during the national anthem. Citing President Donald Trump’s recent comments as their call to action, more and more players are following Kaepernick’s lead and using their platform to take stance on racial issues in America.

The public is responding, saying taking the knee is a First Amendment right and the players are merely expressing that right — and in a peaceful manner, at that. However, does free speech actually exist in the workplace? The NFL’s personal conduct policy states, “all employees must refrain from conduct detrimental to the integrity of and public confidence in the NFL.” They’ve enforced this policy before: in 2013 a Chicago Bears player was fined for wearing green shoes to highlight Mental Health Awareness week. More recently, the league threatened to fine players wearing special cleats in tribute to 9/11. Employers, like the NFL, are allowed to regulate speech in the workplace as they wish, on a case-by-case basis, to maintain brand integrity.

NFL television ratings are down 16%, and the number one reason listed in a poll is the flag protest issue. Another survey found one third of adult Americans are less likely to watch football because of said protests. However, in today’s disruptive political climate, the NFL does not seem too concerned about ratings and, instead, has been supporting its players and their stance.

The Commissioner of the NFL, Roger Goodell, says he’s proud of how the NFL responded and supports the movements: “I think we have to be focused on what the NFL is doing—staying true to our values, unifying people and continuing an effort to understand and help improve our communities.” Although some critics of the movement are saying the NFL is furthering the divide in society, executives for the company see the movement as one which is bringing people together and fostering a climate of solidarity amongst players, stating: “if Trump thought he could divide the NFL, he was wrong. There is no greater unifier in this country than sports, and unfortunately, nothing more divisive than politics.”